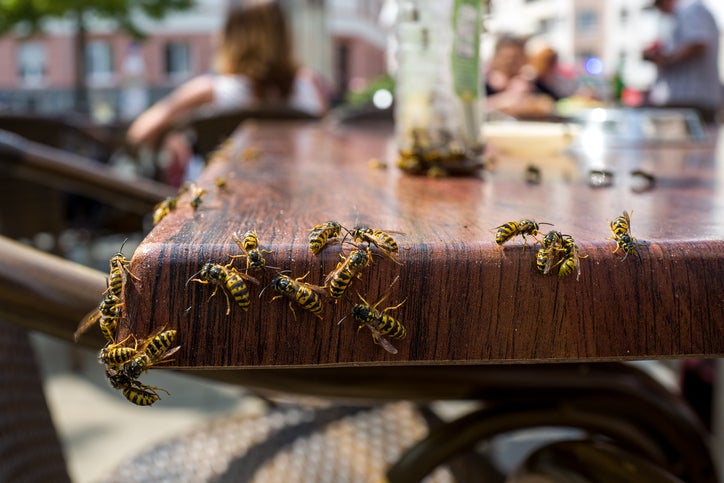 Wasps: how to prepare for a heat wave infestation

A warm winter and spring have given rise to wasp numbers in France, with reports showing a 140% increase in pest control requests to tend to nests. The increase was so notable that France declared 2022′the year of the wasp‘ or ‘the year of the wasp’.

Now, with the UK set to experience another heatwave in the coming days, experts are warning it could be a full-blown swarm.

“France is Britain’s closest continental neighbor and both countries experienced record New Year’s Eve temperatures and the fifth mildest spring on record. This means that more queen wasps have survived the winter and conditions will have been perfect for establishing their nests this spring,” said Dr. Quinton Fivelman, Scientific Director, in a press release. London Medical Laboratory.

“By August, most of the larvae have pupated and the worker wasps have to get their sugar fix elsewhere. That’s when they become a problem when they invade our jam sandwiches and our beers.

[Read more: You think your house is clean – but you basically live in a zoo]

While the UK is set to see temperatures soar this week, the number of wasp-friendly picnics, barbecues and pub garden tables is also set to rise.

How many wasps does the UK have?

There are 9,000 species of wasps in the UK and every year around ten deaths occur as a result of bites. However, there may be more as some are often misdiagnosed. Although this may not result in death for many, and one unpleasant sting is often enough for anyone, there is also a risk that people with allergies may experience anaphylactic shock.

Fivelman goes on to explain that those who have a severe allergic reaction to a wasp sting the first time they are stung have a 25-65% chance of anaphylaxis the next time they are unlucky enough to feel the sting.

Symptoms to watch out for include feeling weak, dizzy, swelling, and a rapid pulse. Finger prick allergy testing is available for those concerned about being allergic.

What you should not do

The London Medical Laboratory sheds light on the key actions to take, or not to take, depending on the case, when faced with a wasp.

Are there more wasps in my city?

Although it may seem that you are more exposed to wasps in the countryside, they also like to make nests in your local park or even in your garden. Few green spaces are safe.

The Big Wasp Survey, which was set up as a registration system to map the diversity and distribution of social wasps in the UK, results published in 2019 after a great practice of civic engagement. Traps have been set across the country, many in urban areas, such as Greater London, showing significant populations of urban wasps. The data is also backed by the Bees, Wasps & Ants Recording Society which highlights species such as the median waspwhich usually nests in private gardens, often in large cities.

So as the heat rises, urban Britons will need to stay safe on two fronts, unless they want to be scorched by the sun and stung by wasps at the same time.

Hosting a party for your study group: 5 tips