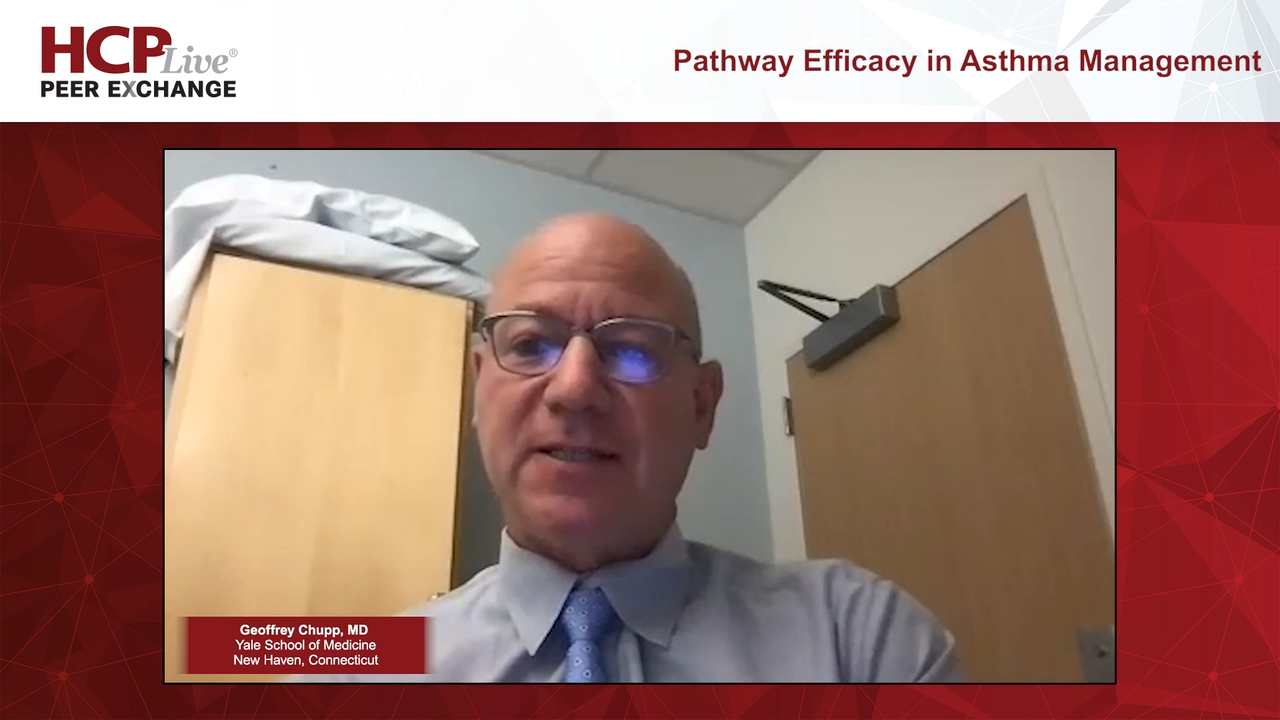 Reynold Panettieri Jr, MD: Sid, we’re gonna ask you to comment on dupilumab [Dupixent]. Dupilumab was interesting because it came into use in atopic dermatitis. This is a drug that was approved for one indication, and the second indication was asthma. Where do you pull the trigger on dupilumab?

Sidney Braman, MD: As you said, atopic dermatitis was the first indication when the drug was marketed and used, with great success. I have had a number of patients with both asthma and atopic dermatitis, and this is definitely where this drug is targeted. It has an excellent effect on exacerbation rates and reduces exacerbation rates. We can see an improvement in the quality of life, and so on. Dupilumab is the only biologic approved for autocorrective steroid reduction. If necessary, it can reduce your need for oral corticosteroids. So this is an area you might think of.

One of the unusual things about dupilumab that should be mentioned – Geoff had mentioned the number of eosinophils – is that most asthmatics are in the hundreds or so. If you see a patient who has an extremely high eosinophil count, say over 1000 or 1500, this is probably not typical asthma, or at least you should consider the possibility that you are dealing with something else. For example, vasculitis – the former Churg-Strauss vasculitis, which we now call EGPA [eosinophilic granulomatosis with polyangiitis]- would certainly be a consideration where mepolizumab, the anti-IL-5, would be indicated and not dupilumab.

Dupilumab, in these high use ranges, has been shown to increase eosinophils, so it is certainly part of the arsenal of T2 asthmatics. Especially in severe cases, it improves exacerbations and symptoms of lung function, and it is increasingly used by this group of patients. By the way, it also has an indication for nasal polyposis, just like omalizumab [Xolair] more recently there will therefore be another indication or another patient group that you would definitely want to target.

Reynold Panettieri Jr, MD: You’ve hit on a very important point: a lot of these drugs started in the area of ​​asthma, but they quickly spread to other co-morbidities. Frankly when we use the drugs we notice that people get their smell and taste back, so there was a lot of crossbreeding, which is certainly refreshing, but it also provides an opportunity for patients with co-morbidities before we start. to choose which organic is really going to hit this mark. Its very important. Dupilumab, while going to be really focused on the alpha IL-4 receptor which integrates both 13 and 4 signals, was found to work with heavy use as well. It actually worked a bit better with higher usage, so the higher the T2 signature, the more likely you are to be an autoresponder. Now, anti-IL-5s have also been approved for oral corticosteroids [OCS] saver. The 1 that has not been approved but has been shown in the real world is anti-IgE, or omalizumab, which has affected protection against OCS but is not on its label.

Nic, coming back to you, how do you determine which path is best for a patient? We just heard about 5 very effective drugs, and we know what they all do and how they are distributed. Give me your strategy on how you sequentially use these drugs.

Nicola Hanania, MD, MS: So it’s still a clinical strategy — I wouldn’t say a dilemma — that we have to do. As you can see, all of the biologics we have are approved for T2 asthma, whether allergic or non-allergic. Phenotyping is important. I do some tests in allergic and non-osinophilic asthma. I tend to use anti-IgE. However, in patients with eosinophilia and non-allergic asthma, we have a choice between an anti-IL-5 or an anti-Il-4 – a receptor like dupilumab or anti-IL-5 agents – and here there are a lot of other things that go into the equation.

We tend to forget about the patient, but we shouldn’t. There is certainly a shared decision making with the patient. Patients need to know what they are getting into. There may be issues with insurance or coverage, and how often it is administered plays a role – whether I want to give it at home or in the office – so there are several things other than the drug itself. Of course, the 1 I’m most comfortable with is what I would recommend, but there’s also patient preference, which tends to overlap. If you have a patient with high eosinophils and allergic asthma, one of these agents may work. As we have shown, we have dupilumab in allergic patients with allergic rhinitis as well as allergic asthma. We know there is a huge effect on IgE production by blocking IL-4, but we have also shown that anti-IgE can also work in allergic asthma.

There is a potential choice: 1 is given every 2 weeks at home, and omalizumab is IgE dependent, maybe given every 2 weeks but sometimes every 4. It is approved for home , but at the beginning we had the choice only to give it in the clinic. All of these considerations must be taken into account. It is actually a journey when you start biological treatment on your patient. It has to involve the patient, and it cannot be a one-way street; we need the 2-part. Of course, we make sure that his insurance covers the drug we want to start. They are not cheap drugs, as you know.

Reynold Panettieri Jr, MD: Love the idea and the culmination of shared decision making. We should not be alone in making the decision. We have to involve the patient. The patient must be a partner in this process, because it is truly a legacy and a journey that he is beginning. Now I get impatient because I want to make people better. How long do I have to stay on a drug before changing because I have a choice? If we go back 12 years ago, we had 1 biological, and we tried to insert this round peg into the square hole, so that we could give them the organic. We knew it probably wasn’t effective because the best patients are the responders, and we really should be using biomarkers. Geoff, I’m curious, when are you going to jump right in and move on to the next organic? Do you have any advice?

Geoffrey Chupp, MD: In terms of changing organics, we need to give it enough time to work. Usually, we follow patients within 3 months of starting treatment and get an idea of ​​their response. Sometimes it is very dramatic, and there is no doubt that patients respond to the drug: their flare has stopped, their symptoms have improved, their lung function is better. I have been called by patients a few weeks or days after starting biologics, saying, “I haven’t felt this good in years. But there are also other patients for whom it takes longer. They may be at the end of a flare-up, their disease is just somehow more resistant, it takes longer to react, their phenotype is more complex, or they don’t flare up as frequently, so 2 or 3 times a day. year. You need to follow them long enough to really understand if they are really responding to the medicine. It can usually take up to 6 months for other patients, so this is usually our approach.

Reynold Panettieri Jr, MD: I agree. Patients want a guide. They want a benchmark. They want to know, “How long am I going to be on this?” Try to describe as best you can. Sure, there’s a lot of variance, but you have to have an idea and a milestone saying, “At 3 months we’re going to pivot, and we’re going to pivot because we haven’t hit those goals. . “This is also an important aspect. Sometimes the anti-IL-5s are very good at clearing out eosinophils, so maybe we can make decisions faster with these drugs and then move on. But a drug like omalizumab is going to take 4 months to really have an impact on the disease process, depending on where you are. I like having a circle on the deck, a hitter who is ready to play when that first batter gets to first base or strikes out, and then he has to be ready to come back in the next 1. I don’t. usually wait or take a break. My own experience is that I change them in pace. don’t think there has to be a wash when you change organic products.

Thanks for watching this HCP Live® peer exchange. If you enjoyed the content, please subscribe to our email newsletters to receive upcoming peer-to-peer discussions and other interesting content straight to your inbox. It reaches you wherever you are: on your phone, in the office or at home. I want to thank everyone and our sponsors for this wonderful opportunity. Have a great day and be careful. Thank you.