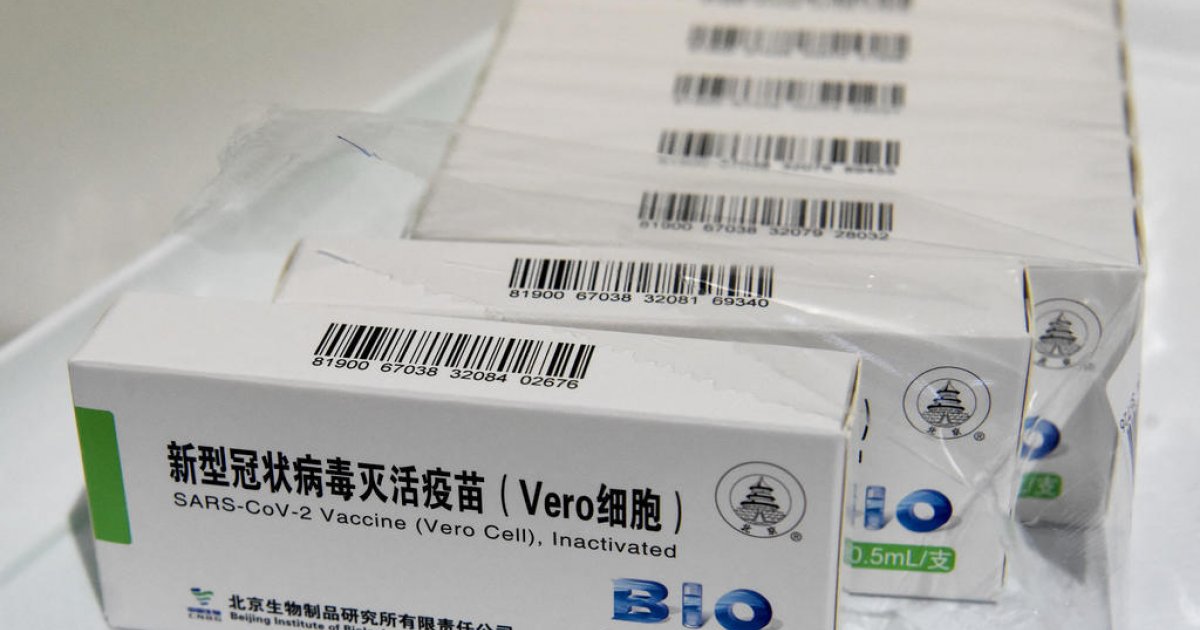 SINGAPORE, October 16 – As of September 30, there had been a total of three reports of suspected “adverse events” experienced by people who received the Sinopharm Covid-19 vaccine, the Health Sciences Authority (HSA) said.

In its sixth safety report, the HSA said yesterday (October 15) that the three reports involved a total of 17,630 doses of the Chinese-made vaccine administered here since August 30, when the first dose was administered. It has been approved as part of the HSA Special Access Route.

So far, no serious adverse events have been reported for the vaccine, he added.

An adverse event for vaccination is any unwanted medical condition that occurs after taking the vaccine that is not necessarily directly related to it. It can be accidental or related to an underlying or undiagnosed disease.

These should be reported by healthcare providers to the HSA.

As for the Sinovac-CoronaVac vaccine, the HSA said it has received 111 reports of suspected adverse events, including nine serious, out of a total of 180,903 doses of the vaccine administered here since September 30.

The 111 reports are an increase from the 90 suspected adverse events shown in the HSA Fifth Safety Report about a month ago.

Despite this, the HSA noted that the type and number of reports received for the different Covid-19 vaccines administered here “are not directly comparable” as the vaccines have been deployed for different lengths of time.

“In addition, these vaccines have been administered to a very small proportion, less than 2%, of the population compared to the much larger scale of deployment of messenger ribonucleic acid (mRNA) vaccines.”

Update on the safety of mRNA vaccines

Regarding the mRNA vaccines from Pfizer-BioNTech and Moderna, which are part of Singapore’s National Voluntary Immunization Program, the HSA said it has received 12,589 reports of suspected adverse events.

About 79 percent of suspected adverse events were in people under the age of 60 and 67 percent were in women.

Suspected serious adverse events accounted for 581 or 0.006% of all mRNA vaccine doses, the same percentage as reported in the last update.

Reactions in children 12 years of age and older

Among children aged 12 to 18 who received the mRNA vaccines, the HSA has received 616 reports of suspected adverse events, which represent 0.1% of the doses given to them since June 3.

This is a slight increase from the 0.08% reported in the previous security update.

Separately, since the booster shots were rolled out to some members of the population on September 15, 237,746 people have received their third injection.

Of these, the HSA received 14 reports of suspected adverse events, two of which were serious.

Serious adverse events have described blood clots in the leg veins and anaphylaxis, the HSA said.

â€œAs the booster dose program was recently rolled out, the HSA continues to closely monitor adverse events and will notify the public of any significant events observed and take relevant regulatory action as necessary. “

Of the 581 suspected serious adverse events related to mRNA vaccines, the most frequently reported serious reactions were anaphylaxis and other serious allergic reactions.

Other suspected serious adverse events include nerve inflammation, numbness in the limbs, blood clots, chest discomfort, and menstrual disturbances, among others.

Anaphylaxis, Bell’s palsy, myocarditis and pericarditis are examples of what HSA calls “adverse events of special interest”, which is a “medically significant event that has been observed historically with other vaccines” .

There have been 77 cases of anaphylaxis reported with Pfizer-BioNTech and Moderna vaccines, and all patients have reportedly recovered after medical treatment.

There have been 81 cases of myocarditis and pericarditis, which refer to inflammation of the heart muscle and the outer wall of the heart, respectively, following more than 8.9 million doses of vaccine administered.

The incidence rate is:

HSA said the risk would be higher in younger men than in women.

Cerebral venous thrombosis is a rare type of blood clot that occurs in the veins of the brain.

Ten suspected cases of cerebral venous thrombosis have been reported with Pfizer-BioNTech and Moderna vaccines.

None of the cases were fatal, the HSA said.

He added that the adverse events reported to be associated with Covid-19 showed an incidence rate of 8.4 per 100,000 in a study here.

There have been 103 cases of Bell’s palsy, an inflammation of the facial nerve, reported with Pfizer-BioNTech and Moderna vaccines, with most reports not being serious.