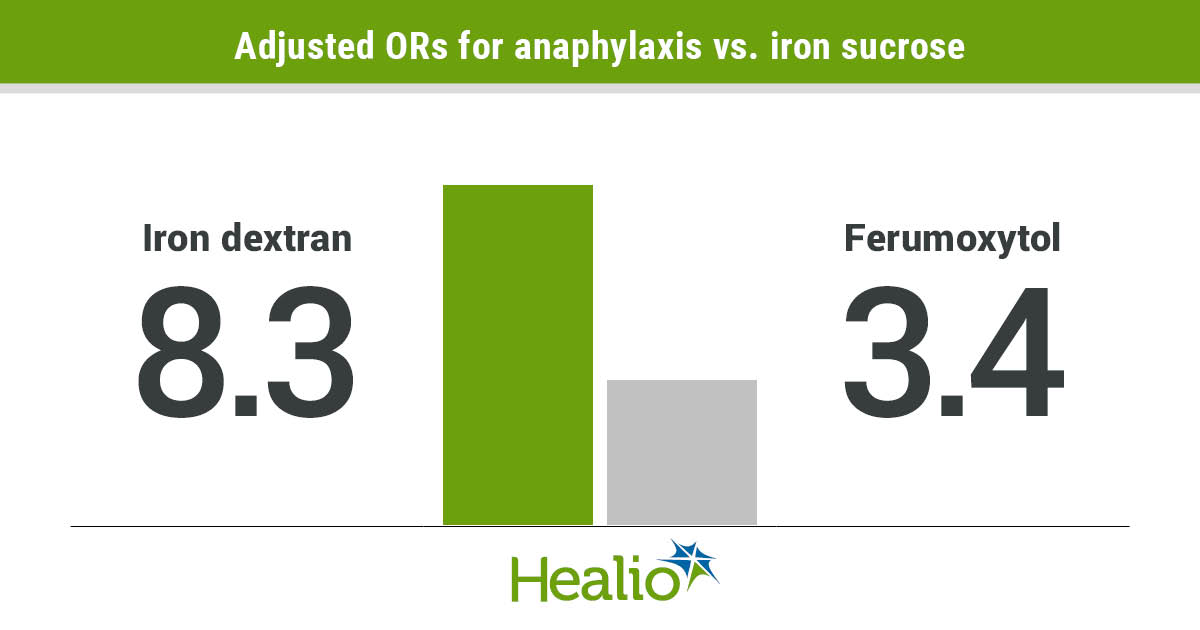 Risk of anaphylaxis from IV iron overall “very low”, but varies by formulation

The largest direct studies of ferumoxytol, ferric carboxymaltose, and iron sucrose, involving thousands of patients, including double-blind studies, have shown no differences in hypersensitivity reactions. The methodology of this study is seriously flawed.

Additionally, because this study used Medicare codes, it excluded the vast majority of patients who receive IV iron, including dialysis, heavy uterine bleeding, pregnancy, most inflammatory bowel disease, and most patients having gastric bypass surgery. It is very troubling that such an eclectic population was chosen.

IV iron is the treatment of choice for all patients intolerant to oral formulations, i.e. 75% of those to whom it is prescribed. Oral iron worsens the symptoms of inflammatory bowel disease and causes the troublesome growth of bad bacteria, negatively altering the microbiome. After bariatric surgery, oral iron is poorly absorbed and very toxic. It also cannot cope with losses from heavy uterine bleeding, and it does not reach the developing infant during the second and third trimesters if the mother is deficient. Under these conditions, it should not be a first-line treatment.

All of these conditions are indications for first-line IV iron. Misrepresenting the relative safety of IV iron using inferential data that contradicts every direct study ever conducted promotes clinically imprudent recommendations for an important treatment modality for the most common nutrient deficiency on the planet.

I have administered tens of thousands of doses of ferumoxytol and low molecular weight iron dextran and have never, ever admitted a patient. I also saw no cases of anaphylaxis, although I did observe minor infusion reactions. These reactions could easily be converted into SAEs with careless intervention with epinephrine, which is one of the surrogates this study used for anaphylaxis. I hope I have clarified how inappropriate this population is for a fair assessment of this extremely rare event.

Also, the ferumoxytol rating from 2013 to 2018 is a huge misrepresentation. Early use of ferumoxytol allowed for a 17 second bolus of 510mg, which was far too fast. A large number of infusion reactions have occurred. These events have often been misinterpreted as anaphylaxis and treated with vasopressors, with subsequent transformation into SAEs, as physicians believe IV iron causes anaphylaxis. This newspaper perpetuates this folklore. The current paradigm of 510 mg in 15 minutes or 1020 mg in 30 minutes avoids this problem. Had the authors been diligent, this incredibly misleading conclusion would have been avoided.

Another study referenced in this review, by Durup and colleagues, looked at over 180 million doses of IV iron and found the exact opposite conclusion. Curiously, Dave and his colleagues referenced this article but did not note its conclusion, which is contrary to theirs.

The use of surrogates that are not anaphylactic, such as wheeze, stridor, periorbital edema, and shock, will lead to specious results. Iron sucrose was compared directly to low molecular weight iron dextran and ferumoxytol, and no differences were noted. This is the case of all the direct studies ever carried out.

The researchers will say that the incidence is so rare that you have to use iterations like they did. But it is incredibly disturbing that in all direct studies, without exception, these conclusions were not observed.

In the history of medicine there has never been cross-reactivity with anti-dextran antibodies with an IV iron formulation – only with dextran as a plasma expander. It’s fabrication.

The conclusions of this study are inaccurate, harmful, and completely inconsistent with the enormous clinical experience that my colleagues and I have with 70,000 to 90,000 doses of iron given intravenously. Its misrepresentation of risk fuels IV iron danger folklore and will lead to harmful clinical decisions.