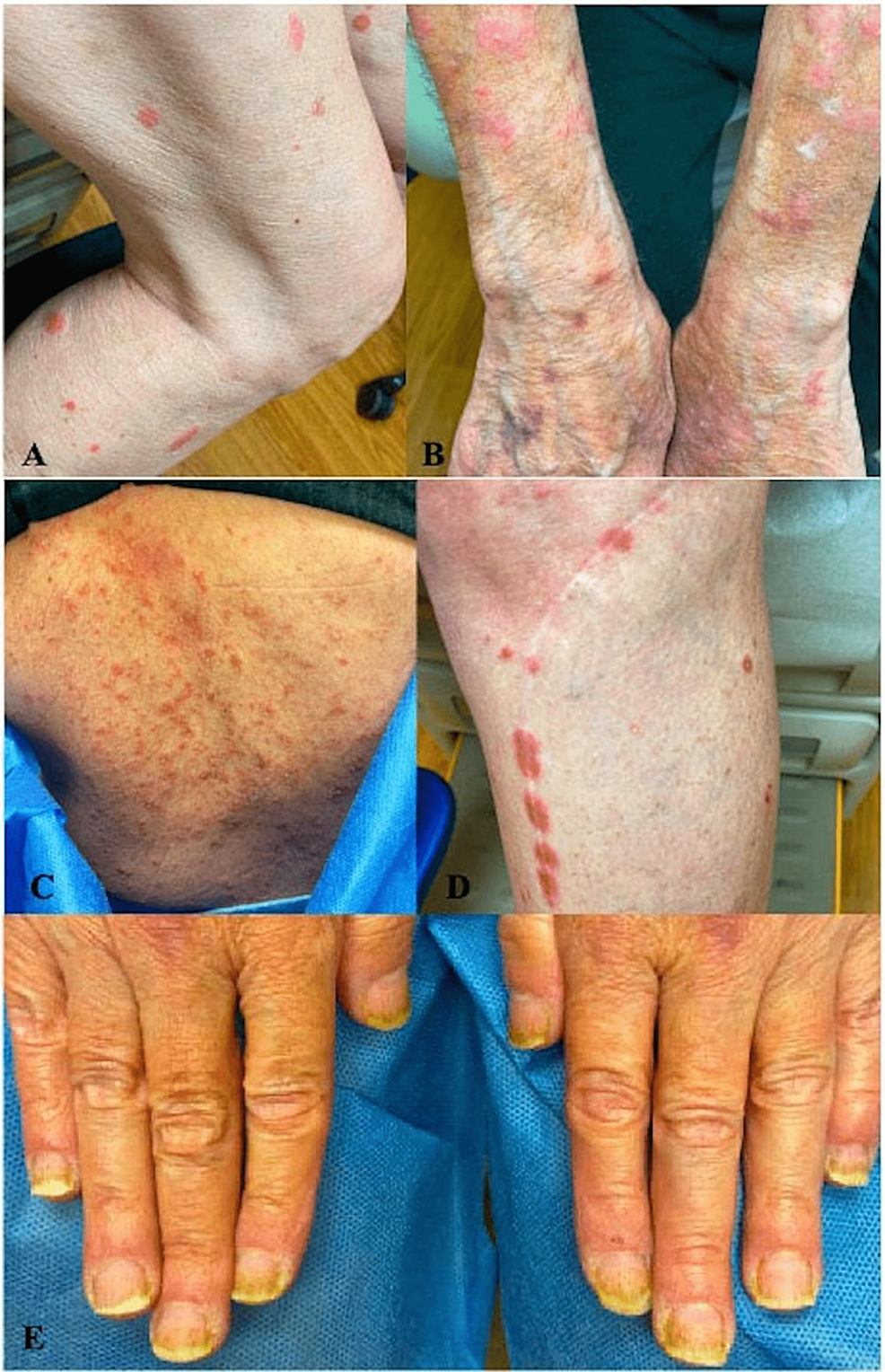 Immune checkpoint inhibitors (ICIs), a class of anticancer agents that upregulate the response of T cells to tumor cells, are associated with immune system-related adverse events (IREs), and the skin is l one of the most frequently affected organs. We report the first two cases of a single clinicopathologic entity induced by ICI. A psoriasiform-appearing rash with a pattern of psoriasiform, spongiotic, and lichenoid dermatitis on histopathology. A 73-year-old man with stage IV melanoma treated with nivolumab and a 63-year-old woman with stage IV colorectal cancer treated with pembrolizumab and TAK-981 presented separately to our clinic with a psoriasiform rash. In both patients, punch biopsy revealed an unusual combination of psoriasiform, spongiotic, and lichenoid dermatitis. Treatment with apremilast in the first patient resulted in some improvement, while treatment with ixekizumab in the second patient resulted in complete resolution of the rash. Our cases add to the growing number of reported immune toxicities associated with the use of ICIs and illustrate the utility of targeted immune suppression of pathways in the disease phenotype to allow continuation of ICIs and optimization of treatment of the disease. cancer.

Recent advances in cancer therapy significantly improve the prognosis of patients. However, a wide variety of dermatological toxicities have developed in parallel, detrimental to the quality of life of patients and which can limit cancer treatment. Immune checkpoint inhibitors (ICI), a class of anticancer agents that upregulate the T cell response to tumor cells, cause immune system-related adverse events (IREs) in about half of patients. [1]. In particular, cutaneous AEs are the most common [1]. We report the first two cases of a unique ICI-induced clinicopathologic entity, a psoriasiform-appearing rash with a pattern of psoriasiform, spongiotic, and lichenoid dermatitis on histopathology.

Presentation of the case

A 73-year-old man with stage IV melanoma and a complex dermatologic history of multiple rAEs, including Grover’s disease of the trunk, eruptive keratoacanthomas, and inflammatory seborrheic keratoses, presented with a history of rash pruriginous on the arms and legs for a month. The rash began 15 months after the start of adjuvant treatment with nivolumab 480 mg IV for brain metastasis after seven years of stable disease after excision for a stage 1B scalp melanoma lesion. At the time of presentation, the patient was receiving treatment with 300 mg dupilumab, 5 mg prednisone, and 100 mg doxycycline for Grover’s disease.

On examination, discrete, pink, scaly patches clinically suspicious of psoriasis were diffusely scattered over the arms and legs (Figure 1A). The patient denied arthralgia. Dupilumab was continued, but the rash continued to spread to the arms and legs and was slightly improved by topical clobetasol 0.05% ointment. Punch biopsy of a lesion on the anterior part of the right thigh revealed an unusual combination of psoriasiform, spongiotic, and lichenoid dermatitis (Figure 2A). The patient was tested on 10 mg of acitretin daily for its non-immunosuppressive properties and cited its efficacy in Grover’s disease [2]lichenoid [3] rashes and psoriasis [4] eruptions, however, with little improvement (Figure 1B). Treatment with apremilast 10 mg daily for similar non-immunosuppressive properties and reported effect on Grover’s disease [5] for a month gave an improvement.

A 63-year-old woman with stage IV colorectal cancer presented with a week-long history of an itchy rash and nail abnormalities. At the time of presentation, the patient’s cancer was being treated with pembrolizumab 200 mg IV every three weeks and TAK-981, a small molecule inhibitor of the ubiquitin-linked modifier protein small pathway implicated in the pathogenesis of the cancer.

Clinical examination revealed diffuse pink scaly papules and plaques on her buttocks and back, demonstrating Koebner’s phenomenon over a scar on her knee. Total body surface area (BSA) was 10% (Figure 1 C–1D), with distal bilateral yellowing of the nails and splinter hemorrhages (Figure 1E). The patient denied arthralgia. When clinically suspected of psoriasis, triamcinolone ointment 0.1% twice daily with halobetasol ointment 0.05% for thicker areas was prescribed. However, follow-up one week later revealed spread of the rash with scattered pink scaly papules and plaques covering 10-30% total body area with increased distal yellowing of nails, splinter hemorrhages and bilateral fingertip hyperkeratosis. Due to the progression of symptoms, cancer treatment was suspended for a week. Given the psoriasiform clinical and morphological characteristics of the rash, the patient started treatment with ixekizumab.

Interestingly, a punch biopsy of a lesion in the left lower back revealed a similar combination of psoriasiform, spongiotic, and lichenoid dermatitis (Figure 2B). A two-week follow-up after starting ixekizumab showed improvement in symptoms and a decrease in body surface area to 5% even after resuming his cancer treatment.

ICIs are monoclonal antibodies that target co-regulatory molecules such as programmed cell death protein 1 (PD-1) to promote a malignancy-targeting immune response through T-cell activation [1]. Unfortunately, this new class of immunotherapies can frequently cause AEs and systemic toxicities due to immune system activation by ICI. [1].

Cutaneous toxicities are the most frequently reported AEs [1] and ICI-induced psoriasiform eruption, de novo or reactivated, is well documented in the literature [6,7]. Both pembrolizumab and nivolumab target the PD-1 receptor to upregulate the immune response against malignancy and have been reported to cause psoriasiform rashes [6]. Rash is strongly correlated with tumor response [6]. Skin biopsy specimens reveal features of psoriasis vulgaris, such as parakeratosis, hypogranulosis, acanthosis with elongation of rete ridges, and perivascular lymphocytic infiltration [6]. In patients with [8,9] and induced by pembrolizumab [10] psoriasiform rash, histopathology may show spongiosis in addition to the classic features of psoriasis. Treatment of ICI-induced psoriasiform rash includes potent topical corticosteroids, vitamin D3 analogs, narrowband ultraviolet B phototherapy, and retinoids or biologics [6].

We report a novel ICI-induced clinicopathologic entity with unusual combined psoriasiform, spongiotic, and lichenoid dermatitis on histopathology. It was previously only reported in association with treatment with antitumor necrosis factor (TNF)-alpha [11]. In case 1, a direct relationship between the appearance of characteristic skin lesions and the initiation of ICI was observed. Although reports show dupilumab-induced psoriasis in patients with atopic dermatitis, it is unlikely that dupilumab caused our patient’s rash, as discontinuation of the drug did not result in resolution of the rash. ‘skin rash. In case 2, rash occurrence and pembrolizumab administration were similarly correlated, indicating that both patients’ rashes were likely induced by ICI.

Our report also suggests that psoriasis therapeutics are effective in the treatment of ICI-induced psoriasiform rashes with histopathological findings of psoriasiform, spongiotic, and lichenoid dermatitis. While acitretin and apremilast were selected for treatment in Case 1, given separate reports of their cited efficacy in psoriasis and Grover’s disease, the ICI-induced psoriasiform rash showed the fastest and most noticeable improvement after targeted therapy with ixekizumab, a selective inhibitor of the inflammatory pro-cytokine, IL-17A, which plays a key role in the pathogenesis of psoriasis. Early Data Indicates IL-17A Inhibitors Can Be Used Safely in Cancer Patients [12].

To our knowledge, we report the first two cases of ICI-induced psoriasiform eruptions with distinct histopathological findings of psoriasiform, spongiotic, and lichenoid dermatitis. Our cases add to the literature on reported immune toxicities related to ICI use and illustrate the utility of targeted immune suppression of pathways in the disease phenotype to allow continuation of ICI and maximize cytotoxic effect. ICI for optimal results in cancer treatment. However, further research is needed to investigate the pathogenesis and underlying molecular characteristics of this novel clinicopathologic entity.

Increased consumption of processed foods due to change