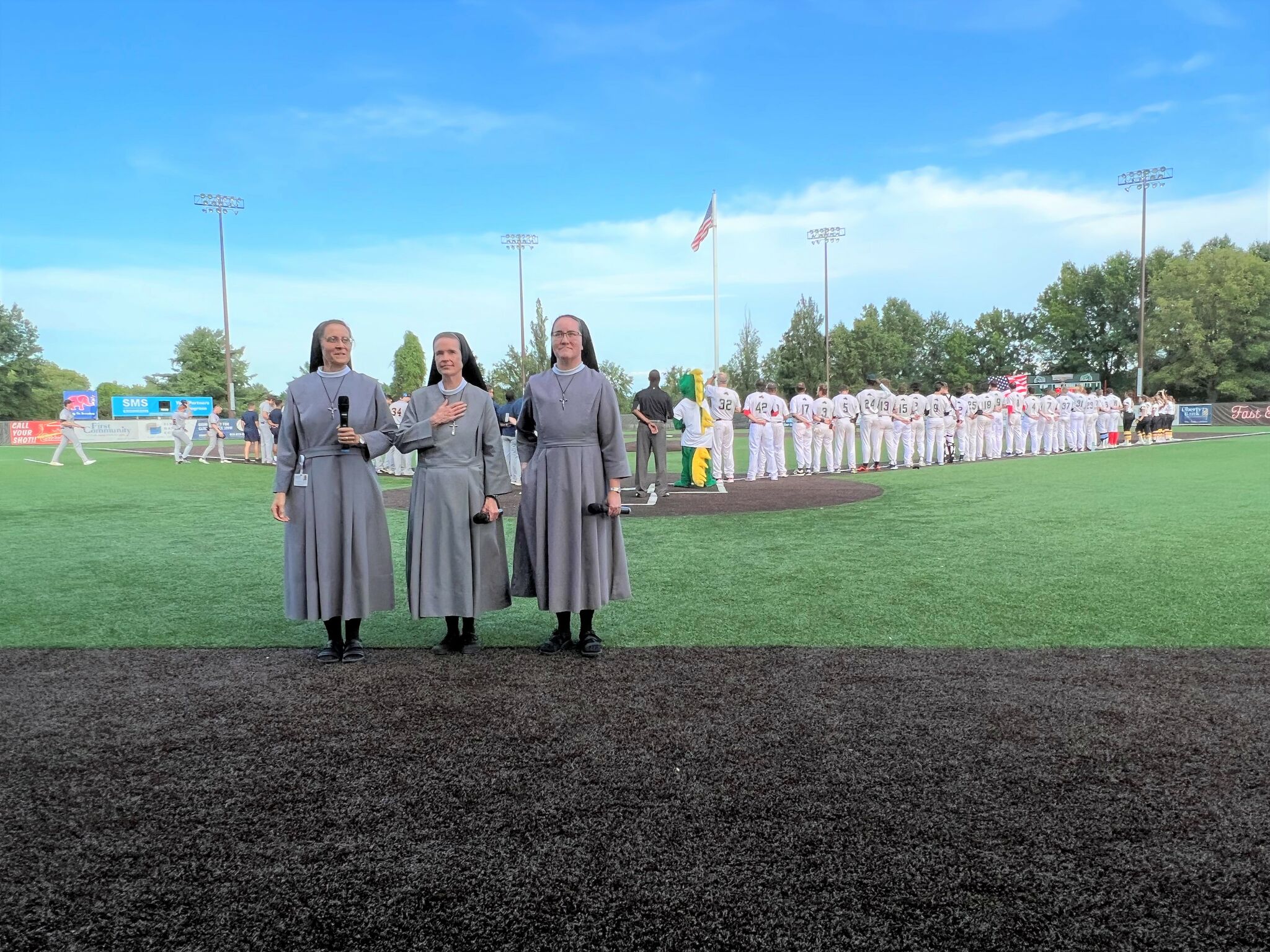 ALTON — As Jim Corby threw the first pitch in the Alton River Dragons pre-game playoff game this week, the Illinois Esprit women’s softball team stood by his side in gratitude.

In support of their favorite coach, the players joined Corby on the mound on Wednesday. Corby is a cancer survivor who received his life-saving treatment at the OSF Moeller Cancer Center in Alton on the Saint Anthony Health Center campus.

“A big part of my battle and my encouragement was this team of 12 awesome girls,” he said.

OSF Saint Anthony Health Center celebrated Provider Night at Ball Park on Wednesday at Lloyd Hopkins Field’s “Dragon’s Den.” Members of the OSF Saint Anthony Community Council, who have a guidance and advisory role, participated along with several OSF staff to support both the local team and the doctors and providers.

The Sisters of St. Francis of the Martyr St. George’s Beata, Rosalinda and Mother Mediatrix sang the national anthem.

OSF held its Vendor Night in appreciation for the dedication, commitment and exceptional care of all of its vendors and physicians provided to the Alton community, something Corby testified to.

“Writing my cancer journey is not something I ever thought of doing because no one thinks they have cancer,” Corby said. “I’m a retired laborer and if anyone knows me, I’ve always enjoyed a cold adult drink, and with that a cigarette or two. So I knew I didn’t have the best habits.”

Last year Corby started having health issues but never gave it much thought and hoped it would pass.

“I had heartburn, so I ate antacids all the time, but with no relief,” he recalls. “Then I had a lot of pain when I ate.”

In May, he finally decided to go to the doctor and started treatment for the acid reflex. After no relief, the doctors decided to do some tests. After an unsuccessful ultrasound and CT scan, her problems worsened.

“I started losing weight because it hurt so much to eat,” he said.

“They examined my throat with a camera,” Corby explained. “That’s when my life changed. The doctor came in and sat down – which is never good – and said I had a lump in my esophagus, which was a cancer.

“Within a week, I was at the OSF Cancer Center meeting Dr. Sandhu and Dr. Piephoff.”

Oncologists Drs. James Piephoff and Manpreet Sandhu made a perfect team for Corby. Piephoff has worked for Saint Anthony Health Center since 2005 at its former Cancer Center of Excellence. He was instrumental in founding OSF’s new Moeller Cancer Center. Dr. Sandhu is known for finding the best treatment for patients, like different chemotherapy treatments if a standard chemotherapy treatment produces a severe allergic reaction, like anaphylactic shock.

They explained in detail the type of cancer Corby had to him and his family. They also informed Corby of his full treatment plan, which is chemotherapy and radiation, with surgery to follow.

“But the operation went really well and I quit smoking and drinking,” he said. “So even though I’m still on treatment, I don’t have cancer anymore. Without the great care of all the nurses at the Cancer Center, I don’t think I could have done this. They went above and beyond than I expected. They really show how much they care about me and my recovery.

Predictors and associations of the persistent airflow limitation phenotype in asthma: a post-hoc analysis of the ATLANTIS study