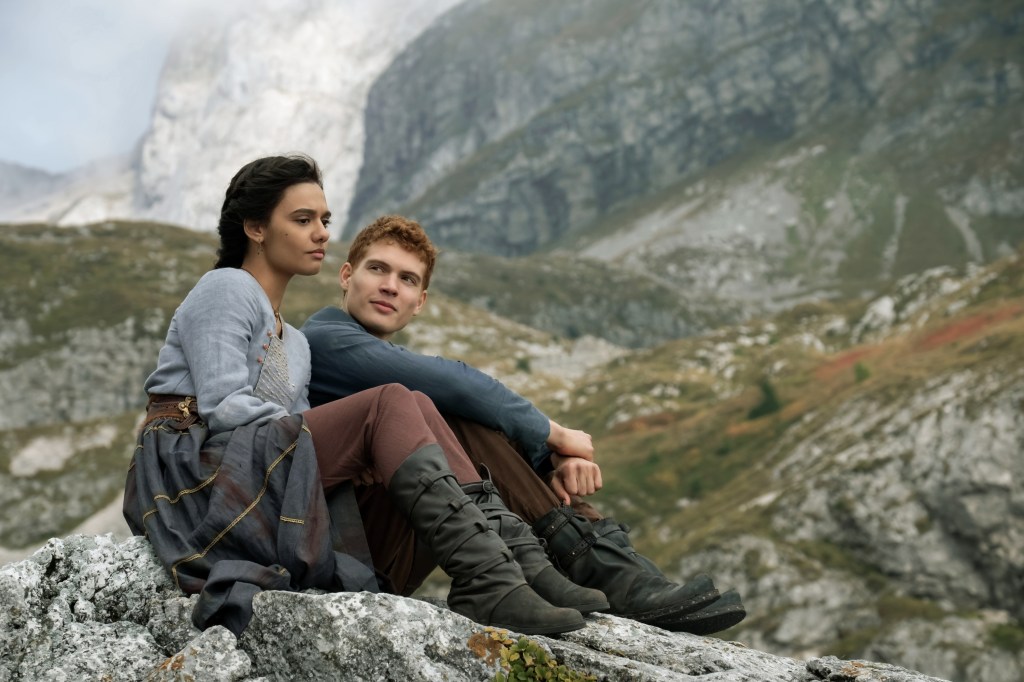 As Will Smith seeks to derail the Oscar draw with his portrayal of Serena and Venus Williams’ father in “King Richard” (we’ll think about it next week), Amazon Prime streaming releases (“The Wheel time “) and Netflix (” Cowboy Bebop “) are worth watching.

Here is our roundup.

“The wheel of time”: While there was a lot of bloating in Peter Jackson’s “Hobbit” movies and a lot of free stuff … everything in HBO’s “Game of Thrones”, this vintage Amazon Prime adaptation of Robert Jordan’s massive fantasy novel series takes place. expertly focuses on the essentials and refuses to over-accessorize.

The six-part adaptation – the first of what promises to be an ongoing series – leaves you stunned. It’s a classically structured epic that respects the source material but isn’t blindly reverent. Series creator Rafe Judkins is working on a large scale, but succeeds, with the cast – led by Rosamund Pike, Daniel Henney, Josha Stradwoski, and Madeleine Madden – in making us worry about the fate of multidimensional characters. Pike plays the mighty Moiraine, who is on a mission to find the Dragon Reborn – a savior in a world that is threatened with being torn apart by the dark side, which includes fearsome beasts known as the Trollocs. All six episodes accelerate with the force of a hurricane and will leave you begging for more. What makes “Wheel of Time” so special is how adept it is at world-building, integrating elements of Jordanian religion and feminism into a classic good versus evil scenario. It is a crowning achievement from all points of view. Details: 4 out of 4 stars; available November 19 on Amazon Prime.

“Cowboy Bebop”: Anytime anyone has the urge to remake an iconic movie or series like this, not everyone within their gigantic vocal fansphere will be happy. It will stay true to this live-action live-action adaptation of the Japanese animated series. The good news is that showrunner Andre Nemec’s 10-episode series has sea legs after a somewhat wobbly start. The cast – including an impressive long-haired, long-haired John Cho as former crime member Spike Spiegel, Mustafa Shakir as former hardworking cop and Cowboy Bebop Jet Black ship captain and Daniella Pineda as player clever – capture the spirit of magical ‘Bebop’, as do neon lighted backdrops that look trippy and otherworldly. Details: 3 stars ; available November 19 on Netflix.

«Tic, Tic… Boom! “: In this big-hearted musical directed by “Hamilton” creator Lin-Manuel Miranda, we enter the hyperactive and restless state of mind of the late playwright Jonathan Larson (“Rent”) as he nears his 30th birthday. birthday. Coming out of a meh performance in “The Eyes of Tammy Faye”, Andrew Garfield belts one like a Broadway star, portraying the energetic, old-fashioned Larson whose ambitions at times overwhelmed those who loved him. «Tic, Tic… Boom! Is packed with great musical numbers and captures what it means to be an artist. In smaller roles, Alexandre Shipp as Larson’s girlfriend, Judith Light as agent, and Robin de Jesus as his gay best friend are unforgettable. Details: 3½ stars; available November 19 on Netflix.

“The power of the dog”: Jane Campion’s brooding western basks in the Montana landscape and then shocks you as it takes a brutal and murderous look at the dangers of machismo and pent-up desires. Based on the acclaimed 1967 novel by Thomas Savage, it is covered in tension (both sexual and violent) as the Burbank Brothers’ 1925 cowboy / ranch life turns upside down when brother George (Jesse Plemons) falls in love. a widow (Kirsten Dunst) who has an often bullied son (Kodi Smit-McPhee). None of this suits George’s cruel brother Phil (Benedict Cumberbatch), who makes everyone’s life a nightmare. Campion’s disturbing and unsettling film is crafted to perfection – from performances to an almost Shakespearean finale. Details: 4 stars ; in select theaters November 17, available December 1 on Netflix.

“Julia”: Much like they did with “RBG,” the Oscar-nominated director duo of Julie Cohen and Betsy West have prepared something special for audiences: a vigorously researched portrayal of an American trailblazer. In this loving portrait, the child’s loves, losses and triumphs, as well as her skills as a businesswoman, are highlighted. The food plans are amazing and the clips from her TV show are a pleasure to watch again. And the revelation Child could admit when she was wrong makes her even more impressive. Details: 3 stars ; opens November 19 in theaters.

“Boiling point”: This would make an ideal pairing with “Julia”, an excruciatingly intense wonder from Philip Barantini. Taking place entirely on a fateful Christmas night at an upscale London restaurant, it follows chef Andy (Stephen Graham) tossing aside as he argues with surprise health inspection, food allergies, hires newbies, demanding customers and a famous chef and restaurant critic who pops in to say hello and then torment him. You will feel like you’ve been tenderized like a hard flank steak afterwards. Details: 3 stars ; In theaters November 19.

“Zeros and ones”: If you’re looking for an outright Hollywood thriller, the kind where Gerald Butler runs and bellows a lot, stay away from this non-traditional genre flick from writer / director Abel Ferrara. Set around a terrorist plot to blow up the Vatican, this fragile and fragile camera COVID-era product stars Ethan Hawke as a soldier on a mission to save his brother. He stays true to Ferrara’s playbook throughout his tidy 86 minutes. Details: 3 stars ; opens November 19 in select theaters and on AppleTV +.

“Sweets and spices from India”: Writer / director Geeta Malik’s dramatic comedy begins as one of those inane, painted by numbers Netflix romantic comedies. But the subversive functionality is a lot smarter and more daring than that. Rather, it ends as the antithesis of a traditional romantic comedy with UCLA coed Alia (Sophia Ali in a perfect performance) spending a hectic summer at her parents’ exaggerated house in the suburbs of New York. Jersey. What she discovers, besides meeting a cute guy (Rish Shah) working in her parents’ Indian grocery store, is that her obnoxiously tense and snobbish mother Sheila (Manisha Koirala) conceals a secret from her past while his father has a secret of his own. . Malik tackles powerful cultural issues with clarity and sophistication, and the film ends up being as much of a spitfire as its compelling female protagonist. Details: 3 stars ; opens November 19 in select theaters.

“Free land”: San Francisco co-director and co-writer Kate McLean teams up with Mario Furloni of Oakland to take us on an immersive road trip to Humboldt County where we encounter one of the most intriguing fictional creations of 2021. Former California hippie Devi (“Krisha’s” Krisha Fairchild) has been a small pot grower / seller in a small town for over 30 years and continues to operate a baby crop that sells primarily in states where the pot remains. illegal. Times, of course, have changed: Marijuana is legal in California and becoming the domain of big business and automated farming. With his band of strap-on workers – some with questionable motives – Devi fights a barrage of bureaucratic maneuvers aimed at shutting down his business. “Freeland” never strikes a bogus moment in its quietly powerful story of a resilient entrepreneur who risks being swallowed up by a system that no longer cares about the human factor. Fairchild is gorgeous and the cinematography is absolutely stunning. Details: 3½ stars; available to stream Friday.

Why doesn’t my husband push his ignorant sister away? Ask Ellie

Women supported via Pop Up Shop