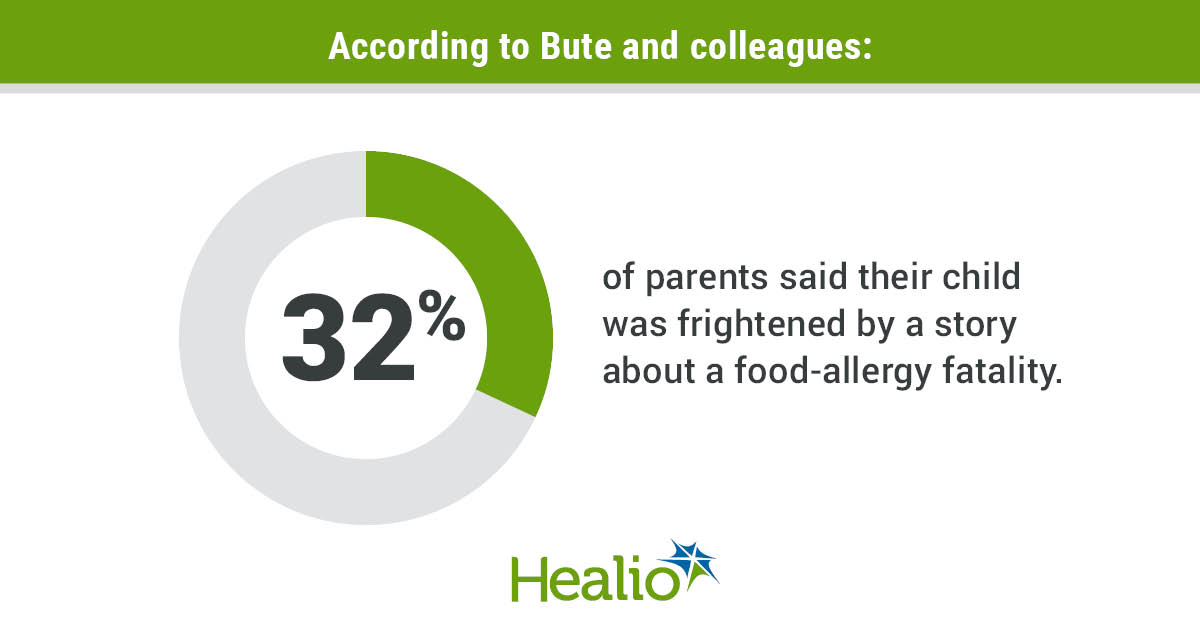 “We were interested in factors that might elicit feelings of anxiety in parents of children with food allergies and suspected that media consumption might contribute,” author Jennifer J. Bute, Doctorate, associate professor in the department of communication studies at Indiana University-Purdue University Indiana, Healio said.

Bute and his co-author, Nicole Martins, PhD, Associate Professor at Indiana University’s Media School at Bloomington, recruited 276 parents of children ages 2-18 to 25 Food Allergy Facebook Groups, 12 Food Allergy LinkedIn Groups, the SnackSafely Newsletter and the Mechanical Turk website. The parents were between 22 and 58 years old (mean age, 38), 74% were mothers and 82% were Caucasian.

These parents responded to a survey on feelings of fear and concerns for personal safety that their children felt in response to reports of deaths from food allergies.

â€œMedia coverage often focuses on stories of deaths. One of the most high-profile deaths in the United States has been the experience of Elija Silvera, whose family has worked tirelessly to improve food allergy education for child care centers, â€said Bute.

According to researchers, 40% of parents watched TV news every day and 40% accessed social media news.

Parents have indicated how closely they follow reports of food allergy deaths on a scale of 0 (not at all close) to 4 (very, very close). On average, parents followed this news very closely (mean, 2.28; standard deviation = 1.1). Parents and researchers both reported that children also watched significant amounts of news.

â€œContrary to what many adults think, children watch and pay attention to the news. Jeanne Cantor, Doctorate, professor emeritus at the University of Wisconsin, has studied children’s news listening habits for decades, â€Martins told Healio, adding that Cantor’s work shows that children watch the news and are often scared of it. that they see.

Additionally, Nielsen ratings indicate that about half a million young people in the United States between the ages of 2 and 17 watch the news on any given day.

â€œSeveral studies show that children’s exposure to information increases in times of national crisis, such as wartime or COVID-19,â€ Martins said. â€œYoung children probably watch these stories with their parents, but older children and teens research the news themselves. ”

According to the researchers, 32% of parents said their child was frightened by a report about a death from a food allergy. After controlling for demographics, parental behaviors, and overall TV viewing, children’s exposure to TV news was a significant predictor of children’s fear-related feelings and concern for their personal safety. However, the survey did not ask about children’s exposure to social media.

â€œIt is certainly possible that exposure to social media will have more or less significant impacts, but this issue can only be addressed with studies of children and not their parents,â€ Martins said.

The researchers further found a significant correlation between parental fear and children’s fear (r = 0.169; P = .005). By rating this fear on a scale of 0 (not at all) to 3 (very afraid), parents reported feelings of fear that were significantly more intense (mean, 1.27) than the fear they reported for. their children (mean, 1.12; P <.05>

So, although their children are the ones at risk of fatal anaphylaxis, parents rated their own fear as greater than that of their children. In addition, this fear was linked to specific news content, and not to overall television viewing. Yet the researchers also said their study suggests that parents influence their children’s reactions.

Parents who watched the news a lot were much more fearful and concerned about their children’s safety than parents who didn’t watch the news as much, the researchers added.

â€œFor parents, we asked about exposure on television and on social media,â€ Martins said. â€œHowever, it wasn’t the platform or the time spent with the media that predicted parents’ feelings of fear or concern for their child’s safety. The best predictor of these two outcomes was how much they paid attention to stories, regardless of where they came from. ”

Overall, the researchers said, the fear reactions parents had to reports of food-related deaths were a strong and positive predictor of their children’s fear-related reactions and concern for their own. security.

However, the researchers noted that due to the correlational nature of their study, they couldn’t rule out the possibility that parents who are already worried that something is happening to their food-allergic child might look for such stories in the media. for more information.

Bute also said the nature of their sample, including a preponderance of white women among their respondents, limits the generalizability of their results, but future studies could explore whether similar patterns could be found in more diverse groups.

â€œAn important next step is to explore whether we see similar patterns in other samples, including more racially diverse samples and samples that include parents who themselves have food allergies,â€ Bute said. , adding that parents with their own food allergies may have different perceptions of fear of children than those interviewed in this study.

The researchers further believe their findings could help doctors and families cope with food allergies and the fears and anxieties they cause.

â€œAllergists may suggest that parents be careful about the media they watch,â€ Bute said. â€œWe tend to think it’s better to have more information, but news media that instigate fear could make parents and their children needlessly anxious. ”

Jennifer J. Bute, Ph.D., can be contacted at jjbute @ iupui.

Nicole Martins, PhD, can be contacted at [email protected]