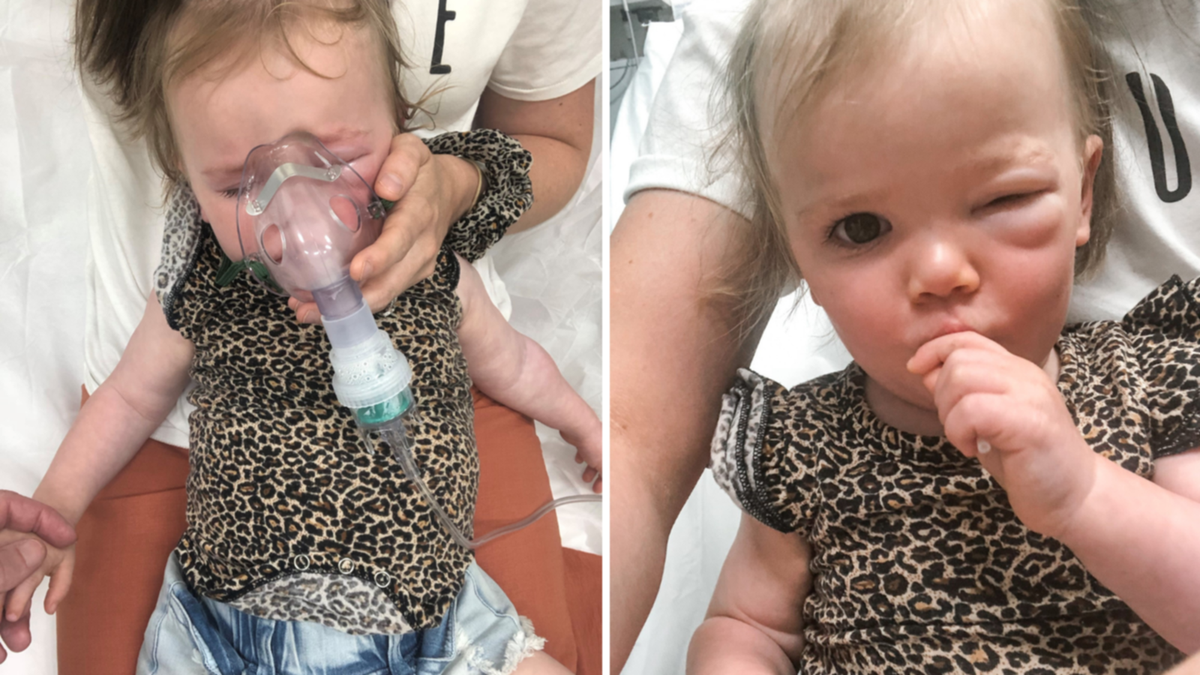 With her one-year-old daughter in her arms, Camille Vowles ran through the streets of Surfers Paradise in search of a doctor.

Little Frankie’s face was so swollen she was almost unrecognizable, she was shivering, coughing and her limbs were turning purple.

Just 10 minutes before, the toddler was laughing, smiling and eating a piece of cheese in a restaurant.

“I am a constant wreck. I’m so stressed and nervous trying to make sure she’s okay all the time,” says Camille. 7Life.

During Camille’s pregnancy, she wanted one thing: eggs.

Boiled, scrambled and fried, there was rarely a day when mom didn’t consume an egg.

And when little Frankie arrived, Camille still loved her eggs.

“I was strictly breastfeeding with Frankie, so I ate eggs all the time,” says Camille.

Now with two daughters at home – big sister Millie and newborn Frankie – the daily food was a family staple.

And as Frankie got older and transitioned into solid foods, she loved her scrambled eggs for breakfast, just like her mom.

The mum-of-two quickly turned to a well-oiled machine with a strict routine in place for her youngest daughter.

So after breakfast every day, Frankie was put to bed for her morning nap.

But when Frankie was seven months old, something strange happened.

After wolfing down her scrambled eggs, a meal she’s had five times before, she headed off to take a nap.

Upon entering, she saw that Frankie was covered in vomit and was still vomiting on herself and in her bed.

The mum quickly sprang into action and picked up her coughing and sputtering daughter.

“I just assumed it was gastro and didn’t really think about it,” Camille says.

After comforting Frankie, she quickly recovered and the mother thought no more of the episode.

Then, a few weeks later, a similar scenario occurred.

“His eye immediately began to swell and close” – Camille Vowles

Camille fed Frankie scrambled eggs and put her to bed. This time, the mother woke her up from a nap and put her in the car for a family outing.

But shortly after the trip began, Frankie started vomiting projectiles on the freeway, strapped into her car seat.

“She vomited about six times in the space of half an hour,” Camille recalls.

This time, Camille connected the two incidents and assumed it must be related to the scrambled eggs.

Sure enough, the GP confirmed that Frankie was allergic to egg protein.

So even if Frankie wasn’t anaphylactic if she were to consume an egg product, she would most likely vomit, have diarrhea, and have severe stomach pain.

Usually this is the kind of allergy that a child will overcome and with the doctor’s advice, Camille hoped that when Frankie turns two, she will be able to enjoy her favorite breakfast again.

So, Camille took steps to minimize egg products from home to create a safe environment for her daughter.

“It was cross contamination, but by the time I realized it was already in his mouth” – Camille Vowles

A few months later, the family was out for lunch when the mother decided to share a piece of halloumi with Frankie.

Camille grabbed the knife from her plate and sliced ​​a bite-sized piece of cheese for her daughter.

Looking at her own dish, she noticed an egg on her plate.

“I immediately knew I was eating eggs and used my knife for his cheese – it was cross contamination but by the time I realized it was already in his mouth – he was too late”, admits Camille.

The mother knew she had about an hour to go before the side effect of Frankie’s allergy kicked in and she started throwing up.

But within 10 minutes, Frankie’s demeanor had completely changed.

“Something was wrong, she was cold and starting to shiver. His eye immediately began to swell and close. This has never happened before. I just grabbed her and knew there was a doctor down the street so I ran over there,” the mum says.

Frantically, the mom ran down the street with Frankie in her arms.

Arriving at the GP, Frankie was immediately put on oxygen to help her breathe and treated for anaphylaxis.

“They told us that sometimes allergies can get worse the more you eat,” says Camille.

Luckily for little Frankie, she made a full recovery.

And since that incident, she’s added two more allergies to her medical records – bees and ants.

Now, Camille says that her epi-pen accompanies her everywhere.

There have been a few run-ins with bee stings and ant bites that have caused Frankie’s feet to swell up to four times their size, but thankfully the mother hasn’t used the epi-pen yet.

Frankie’s doctors are confident her allergies are here to stay, but the three-year-old will return for another skin test just before she starts school.

“Schools are really good with allergies, and I know most don’t even allow peanuts or tree nuts anymore. But I know his school sells boiled eggs in the canteen, I know it’s still a few years away and I shouldn’t worry about that now, but that’s how cross-contamination happens,” says the mother.

Born alive after his mother refused to eliminate him, this Australian baby faced another deadly threat

Like all children with allergies, Camille says getting others to understand is often the hardest part.

“We will go to a restaurant and ask if a meal contains eggs. They’ll go check with the chef and come back and say “we don’t think so”. It’s not enough… it can be life or death,” says Camille.

In addition to raising awareness about allergies in people outside her household, Camille also educates her daughter on “safe foods for Frankie.”

“Honestly, I’m a nervous wreck just trying to protect her. She can have a birthday cake without an egg, but I think it’s confusing for her, she doesn’t understand that most cakes aren’t safe for her,” the mum adds.

With almost 20% of Australians having some form of allergy, the nation was crowned allergy capital of the world for three years.

Camille is working to remove some of the educational stigma surrounding allergies.

“With my first daughter Millie she was bottle fed and has no allergies. With Frankie she only had breast milk and I ate eggs the whole time so she was consuming them at that time We have to stop blaming the mother and the way the children are brought up. Sometimes allergies just happen,” explains Camille.

The doctors said I would be dead when I was born. That’s how I thrived with half a heart