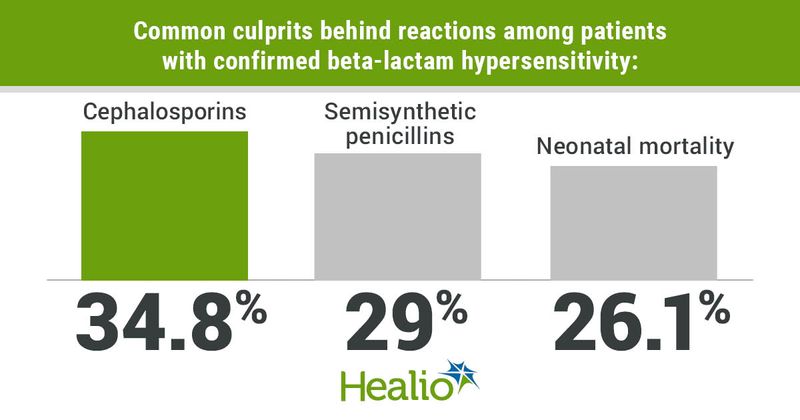 According to a study published in Annals of Allergy, Asthma and Immunology.

But the patterns differ between inpatients and outpatients, Yuda Chongpison, PhD, MS, MBA, epidemiologist and biostatistician from the Skin and Allergy Research Unit at Chulalongkorn University, Bangkok, and colleagues wrote.

Natural and semi-synthetic penicillins were the most frequently implicated drugs in BLH in the outpatient group, while cephalosporins and carbapenems were the main drugs implicated in the hospitalized group.

In addition, 45.9% of reactions in the outpatient group and 14.5% of those in the hospitalized group reported a suspected IgE-mediated reaction to beta-lactam antibiotics.

According to the researchers, 18.9% of all reactions were serious skin adverse reactions and 14.6% of combined skin and in vitro tests were positive.

Specifically, 14.6% of 41 participants with a history of immediate reaction to penicilloyl G and amoxicilloyl tested positive for sIgE antibodies to these drugs.

DPTs among 137 patients with 144 reactions yielded 14 (9.7%) positive results, including three patients with urticaria, two with fixed drug eruption, and two with maculopapular rashes, meaning that 90.3% of those who underwent TPD had their BLH demarked. Between 2 and 8 hours after the drug challenge, five patients developed anaphylaxis and two developed serum sickness-like reactions (SSLRs).

Of all 381 reactions, there was a 15.7% rate of positive results in combined in vivo and in vitro tests, including direct DPT, and 18.1% had their BLH confirmed.

Among 199 reactions in 185 patients whose BLH status was verified, BLH appeared to be significantly associated with newer generations of beta-lactams, including cephalosporins and carbapenems, hospitalization, allergic history of one year or less and underlying malignancies or autoimmune diseases.

In reviewing 63 patients with 69 verified beta-lactam allergic reactions, researchers found an increased risk of type IV hypersensitivity reactions in the hospital setting compared to the outpatient setting (OR=9.7; 95% CI %, 3.1-30.3).

After adjusting for HIV infection status, researchers also found that patients with underlying autoimmune diseases had increased risks of non-Type 1 and IV reactions, including delayed anaphylaxis, and SSLR (adjusted OR = 5.3; 95% CI, 1-27.9) .

Based on these findings, the researchers concluded that newer generation cephalosporins and other beta-lactams were more likely to have an increased risk of BLH, with different patterns of hypersensitivity in hospital and outpatient settings.

They also concluded that current BLH demarking approaches are not applicable to high-risk patients with contraindications to DTP, whereas combined in vivo and in vitro techniques would be more appropriate in the hospital setting, although other new ways of identifying culprit drugs should also be explored.

How to apply for a payday loan with PaydayDaze today in California.