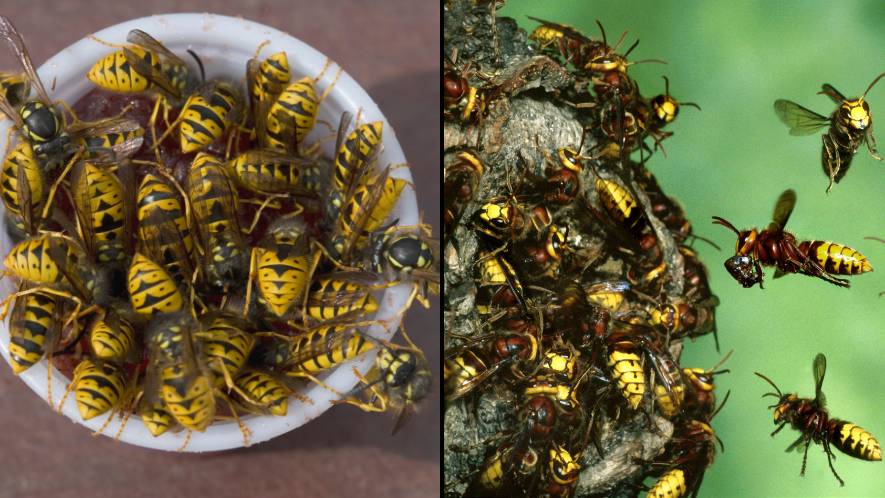 Huge swarms of wasps are expected to invade the UK by the end of summer due to the heatwave. Because what better way to scream in the summer than hordes of angry wasps…

Experts are now warning Britons to prepare for the ‘sugar-crazed’ insects that will arrive at the end of summer, dragged down by the end-of-season heatwave.

Wasp numbers are expected to be significantly higher due to warmer temperatures this year. Wasp numbers can fluctuate from year to year, depending on seasonal and weather changes that can determine their chances of surviving until spring.

As wasps choose to build their nests in the spring in trees, attics and even underground, if there is bad weather it can destroy their homes and decimate their survival rates. However, this year the sweltering temperatures combined with less rainfall have instead given the wasps the perfect environment to multiply.

Sébastien Pommereul, manager of the company Stop Wasps – Stop Pests, spoke with BFM-TV: “This year, we are doing between 10 to 12 interventions per day. Last year, we were at five.”

The onslaught of insects has even led to 2022 being dubbed “the year of the wasp” by exterminators.

The latter months of summer are when wasps can go “sugar crazy” when their larvae transform into full-sized wasps, which means they need to find a new source of energy. It’s the perfect time to enjoy summer barbecues or even sit outside in a beer garden. Wasps are usually attracted to our sweet treats like prosecco, soft drinks, and ice cream, and are therefore the perfect place for a fleet of wasps to refuel.

For those of us who were unlucky enough to be stung by a wasp this summer, the NHS says: “Bug stings and stings usually cause a red, swollen lump to develop on the skin. This can be painful and in some cases can be very irritating.

“Symptoms normally improve within a few hours or days, although they can sometimes last a little longer.”

However, for some, it can cause an allergic reaction in some people that can still be considered “mild”.

NHS guides: “A larger area of ​​skin around the bite or sting becomes swollen, red and painful. This should pass within a week.”

For some, a wasp sting can cause some people to go into anaphylactic shock, which requires urgent medical treatment.

Symptoms of anaphylaxis include:

The NHS website says: “Dial 999 for an ambulance straight away if you or anyone else has symptoms of a serious reaction. Emergency treatment in hospital is needed in these cases.”