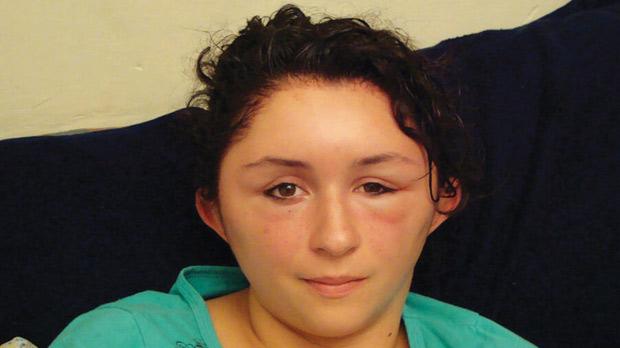 A young woman’s head swelled to twice its normal size the day after her hair was dyed, and she had to be rushed to the hospital emergency room with a severe allergic reaction to the hair dye.

Daniela Carabott Pawley, 20, spent three days in hospital after swelling spread to her eyes and face – she was shocked when she saw the reflection of an ‘alien’ on her face. watch from the mirror.

“At the hospital, I felt like I was on a show as the staff came to see me, having a hard time believing my head could have swelled to such proportions,” she said.

Undergraduate student Ms Carabott Pawley decided to share her story with The Sunday Times in the hopes of raising awareness that hair dyeing is not necessarily a harmless beauty treatment and, although the incidence is be not high, chemicals in the hair color can lead people to the hospital. .

In extremely rare cases, allergic reactions to a particular chemical in hair dye – para-phenylenediamine (PPD) – can lead to death. As recently as last week, the Belfast Telegraph reported that a 17-year-old died of a fatal seizure shortly after dyeing her hair.

For Ms Carabott Pawley, the trauma began on October 1, when she went to the barber to have her hair dyed black purple, before starting her third year in college.

The next morning, she woke up so dizzy and nauseous that she went back to bed. She initially blamed the mozzarella sticks she shared with her friends the day before, but none of them developed her symptoms. That’s when it turned out that hair dye could be the culprit.

She had previously colored her hair black using a homemade kit and developed irritation around her earlobes, but it disappeared after two days.

“This time, I didn’t know if it was an allergy or if I had applied it incorrectly. So I just warned the hairdresser to keep the dye away from my skin – I never thought it would have such an effect, ”Ms. Carabott Pawley said.

She spent most of Sunday lying on the sofa. Her head gradually began to swell, and at one point, a “molten honey-like liquid”, possibly blood plasma, began to flow from her head.

“The pain was eased, but it was a strange feeling. At that point, I still felt in control, ”she recalls.

She kept trying to wash off the hair dye, but her face kept swelling. In the evening, she was doing so badly that her sister, who had just come home, was shocked to see her sudden transformation.

“That’s when I really started to worry. My right eye had swelled up and I was worried my face would never go back to what it was, ”she said.

She went to a polyclinic where the doctor prescribed steroids and antihistamines, but the drug had no effect. She was lying on the sofa, exhausted and eager to sleep, but her sister and mother had the presence of mind to keep her awake and prevent her body from falling into shock.

She was admitted to the emergency department at Mater Dei Hospital, and when the doctor saw her, he said, “It’s back.

She learned that a week earlier a girl was admitted with the same symptoms after dyeing her hair. It was clear that she too was suffering from a similar allergic reaction.

“At that point all I could think of was how am I going to go to college the next day with such a swollen face. I was in denial and did not understand the gravity of the situation, ”said Pawley Carabott.

“The doctor said I was lucky to be alive and they had arrived just in time,” she added.

Throughout her stay in the hospital, her body kept trying to expel the dye as it oozed out the molten liquid and although the swelling subsided throughout the day, in the morning it was always worse.

“They kept making sure my face would go back to normal but I was scared.”

Looking back, Ms Pawley Carabott recalled that some time ago she got a henna tattoo and developed blisters and rashes, but it was only now that she linked that to the hair dye.

In 2005, the Consumer and Competition Division carried out inspections to determine if PPD was being used by local henna tattoo artists to make the dye darker.

According to EU rules, producers are allowed to use up to 6% PPD in hair products, and although it is found in two-thirds of hair dyes, it has been banned in Germany, France and in Sweden.

When contacted, dermatologist Lawrence Scerri said hairdressers should be aware of this harmful chemical and ideally choose a PPD-free hair dye available on the market.

Dr Scerri said reactions to PPD are not uncommon, but people who have never had a reaction to hair dye should not be alarmed.

The hair dye used on Ms. Pawley Carabott doesn’t actually list PPD as one of its ingredients, but it does include another chemical (toluene-2,5-diamine), related to PPD.

She has not yet established the ingredient that caused the unusual swelling and will be heading to Boffa hospital in the next few days to have a skin test.

Despite the standard warning on hair dye packages to do an allergy test 48 hours before application, no testing has been performed on Ms. Carabott Pawley, and she urges people not to skip this procedure.

Independent journalism costs money. Support Times of Malta for the price of a coffee.

Ballot initiatives allow the people to avoid right-wing politicians in this election,…