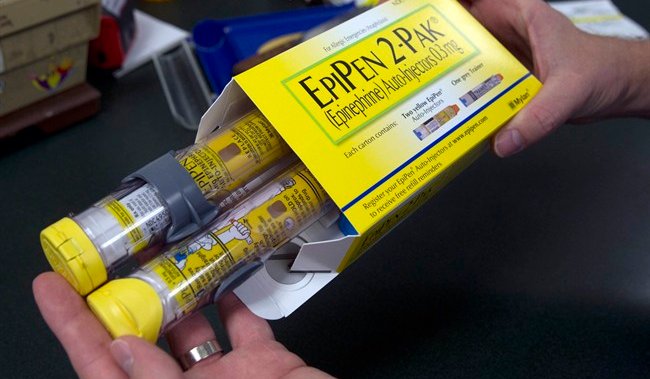 The death of an Edmonton man from exposure to nut particles at work highlights the need to make life-saving drugs like epinephrine more readily available, advocates say.

“I think it’s very important that anyone with a reaction have access to epinephrine immediately,” said Food Allergies Canada spokesperson Beatrice Povolo.

“In situations where they do not have a device, or a second dose may be needed, it is certainly beneficial to have the epinephrine stock available in various public spaces.”

On October 2, Justin Mathews was doing contract work at the Rossdale Fire Station, where crews were sanding with walnut particles. The 33-year-old man began to have difficulty breathing and suffered anaphylactic shock. He was rushed to hospital and removed from the resuscitation system five days later.

Mathews’ family do not know where his EpiPen was at the time, but said that with the exception of a hospital visit, he was able to control his allergic reactions with oral antihistamines .

The story continues under the ad

Dr David Huang, a specialist in clinical immunology and allergy, said a rapid response is crucial for severe allergic reactions.

“The earlier you give epinephrine, the faster and more effective it is. As soon as signs appear … do not hesitate to use it. People should be very familiar with how EpiPens is to be administered.

Mathews’ family is requesting that EpiPens be available in public spaces. The city of Edmonton said Monday that the city’s facilities do not have EpiPens or epinephrine.

Povolo said Hamilton, Ont. recently equipped all of its public community centers and facilities with epinephrine. And in Quebec, a chain of restaurants is stocking the drug in all of its locations, she added.

“We would definitely recommend that various organizations or businesses consider this option as part of their first aid kit,” she said.

Povolo also believes that the more information you can provide to people with severe allergies, the better, and not just when it comes to food.

The story continues under the ad

“I think in general, providing more information is always better in terms of potential allergens people may be exposed to. I think this is a key point to remember, as well as making sure people with allergies wear their device and use it at the first sign of a reaction.

READ MORE: Anaphylactic reactions may have a rebound effect

Mathews’ family also wants to see Safety Data Sheets on the sandblasting product to alert people to the allergen.

Occupational Health and Safety has launched an investigation to see if all necessary precautions have been taken at the site. The city of Edmonton has said it is cooperating with the investigation.

Alberta Health said it had to wait for the results of the OHS investigation before making any recommendations.

Watch below: The family of a 33-year-old Edmonton man talk about the danger of airborne nut particles after he dies after being exposed to an allergen on a construction site. (Filed Sunday, October 22, 2017).