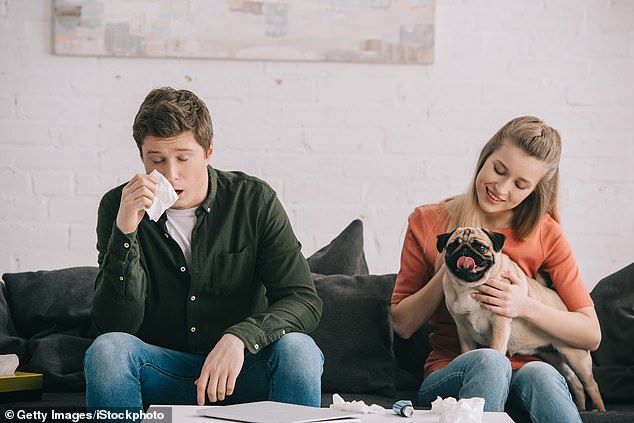 DR ELLIE CANNON: Could my allergic husband take pills so we can have a dog?

The children and I wish to have a puppy, but my husband refuses. He insists he’s allergic, and since he has asthma, that would be a stupid thing to do.

He always takes an antihistamine when we visit my brother, who has a hypoallergenic type of dog.

Would it be dangerous for my husband to take an antihistamine every day, if we decide to have a dog anyway?

I’m sure it would be good for the health and general well-being of the family.

A dog can be a great addition to a family and can be good for everyone’s health because of the walks, companionship, and joy pets can bring to the home.

It’s not for a GP to help decide if a family should buy a pet, and I’m not familiar with so-called hypoallergenic dogs – a term that usually refers to those who don’t shed much of hairs.

But to answer the question, when someone has an allergy, yes they can safely take an allergy pill daily. This is exactly what hay fever sufferers do for long periods of the year.

Antihistamines generally have few side effects and can be taken by children.

Allergies have a broad spectrum, ranging from very mild with a bit of sneezing or a runny nose to complete anaphylaxis, which is potentially fatal.

It is difficult to quantify the severity of a person’s allergy – we usually know this from the reactions they have had. It is also more complicated if someone has asthma, which may have an allergic component. In this case, a dog could potentially trigger breathing difficulties.

Even if someone has only had mild reactions in other people, these could be more severe in their own home when they are constantly exposed to the allergen in greater amounts.

I had surgery to remove my prostate in September. I felt physically recovered after about four months, but am now having bad dreams and waking up depressed. Are they typical and can I expect them to eventually go away?

Many people suffer from depression after surgery, and several factors can contribute to this. In the short term, there may be reactions to anesthesia and, more rarely, to antibiotics given after an operation. Pain and discomfort, as well as reactions to painkillers and steroids, which are given to reduce inflammation, can also affect mood and cause trouble sleeping.

More generally, the diagnosis of cancer – which is the reason for the removal of the prostate – and the changes in routine caused by treatment and recovery from surgery can impact mental health.

Many people suffer from depression after surgery, and several factors can contribute to this.

It can also be psychologically difficult to have the prostate removed, as it is associated with virility and sexual function, so worries and fears about it can cause emotional changes and nightmares. Additionally, prostate cancer patients are often given drugs that affect levels of the male hormone testosterone – to prevent it from fueling tumors – and these can also cause mood swings. and changes in sleep patterns.

And of course, just because two events happen at the same time doesn’t mean they’re related. Depression and sleep problems are common and have multiple causes. Any significant symptom that marks a change from the norm should warrant a conversation with an understanding GP.

I suffered from basal cell carcinomas for 40 years. They look like spots, but they are a type of skin cancer. Every time I discovered one – on my face or chest – I had it removed. Recently I saw a new doctor as I suspected I had another one on my forehead. He said it was actinic keratosis – rough skin – and gave me some cream. The stain is getting worse now. What should I do?

Basal cell carcinomas are the most common skin cancers, but they are an unusual type of the disease. Present on the surface of the skin, they do not spread and it is exceptionally rare for a patient to die from them.

More Dr Ellie Cannon for The Mail on Sunday…

As a rule, it looks like a crust on the skin with a bordered edge or a pearly mass. The best way to diagnose them is to remove them and have them examined under a microscope.

If a patient is suspected of having basal cell carcinoma, they will generally not be referred urgently, as we do for other cancers. Instead, they will consult a skin specialist or dermatologist.

Usually the lesions are removed with a small surgical procedure. But in some cases, doctors will freeze it or scrape it off.

Actinic keratosis is not a cancerous lesion. It is a wart-like patch of skin that is usually the result of sun damage. They are most commonly found on sun-exposed areas such as the face, scalp, and the backs of the hands.

They appear as rough, scaly patches — sometimes pink or flesh-colored — and often begin to thicken.

If the stain worsens after treatment, an examination by a specialist is necessary. It could be another type of skin lesion that needs to be removed.

But it is also possible that actinic keratosis has undergone cancerous transformation and requires urgent removal.

Skin lesions are not always easy to distinguish from one another. But if the problem worsens or worsens in any way, a second opinion is needed.

Confusion over the weight loss jab

Do you have a question for Dr. Ellie?

Dr. Ellie can only answer in a general context and cannot answer individual cases, nor give personal answers. If you have a medical condition, always consult your own GP.

I wrote a while ago how happy I was that a weight loss jab called semaglutide is now available to thousands of obese NHS patients struggling to lose weight.

But judging by your letters, there is confusion as to who can get it. Let’s be clear: this isn’t for just anyone who can’t lose weight with diet and exercise.

It is a treatment prescribed only for people with health problems related to their weight and who need to lose a significant amount to avoid surgery or heart disease.

There are serious side effects involved – vomiting, diarrhea and, if patients are not monitored properly, organ damage.

Yet, I have heard of private doctors prescribing it to patients without health problems, for a high fee.

Write and tell me.

The Hard Lesson of the Maternity Scandal: Listen to the Patients

Last week saw the release of a long-awaited report into a 20-year-old maternity scandal at Shrewsbury and Telford Hospital NHS Trust.

The results were shocking – among 1,600 cases he looked at, he found failures that resulted in over 200 babies dying, others suffering brain damage and mothers seeking help, sustaining injuries who changed their lives or even died in childbirth.

The midwife who led the review, Donna Ockenden, said there was a reluctance to perform caesarean sections, assuming natural birth is preferable. This is not a historical problem – the same harmful attitude now exists among maternity staff across the country. Its report lists 15 “immediate and essential actions” to improve the safety of pregnant women and newborns.

I hope this marks a radical change in attitudes in maternities. On the contrary, the report is a stark reminder that failure to listen to patients’ concerns can have fatal consequences.

Last week saw the release of a long-awaited report into a 20-year-old maternity scandal at Shrewsbury and Telford Hospital NHS Trust. The scandal claimed the lives of some 200 babies, file photo)