Despite the lengthening of the ragweed season, Minnesota escapes the “wheeziest and sneezing” list

None of Minnesota’s cities feature in the top 35 of the “most sneezing and wheezing” report.

A third of Americans – 109 million people – live in areas where they are exposed to both ozone smog pollution and ragweed pollen, according to a report published Wednesday by the Natural Resources Defense Council (NRDC), an environmental group headquartered in New York.

“This is bad news for people with allergies and asthma, because ragweed pollen and high levels of ozone smog can trigger asthma attacks and worsen allergic symptoms in adults and children,” says The report. “Additionally, studies show that people exposed to both ragweed allergens and ozone are likely to become sicker than people exposed to just one of the two.”

Climate change is behind much of the recent increase in ozone smog and ragweed pollen, the report adds. Warmer summer temperatures can increase ozone levels, and warming temperatures also lead to shorter winters, which means longer ragweed seasons.

Indeed, between 1995 and 2013, the pollen season of ragweed in the Twin Cities agglomeration lengthened by 21 days, according to the Environmental Protection Agency (EPA).

However, Minnesota is doing relatively well in the NRDC report. Although much of the state is identified as ragweed territory, none of Minnesota’s cities are among the top 35 “most sneezing and wheezing” cities in the report. This list is only for cities with the “double health risk” of high levels of ragweed. and ozone pollution that exceeds the EPA sanitary standard at least once a year.

The article continues after the advertisement

The top five cities on the NRDC’s list are Richmond, Memphis, Oklahoma City, Philadelphia, and Chattanooga. The cities on the list closest to Minnesota are Chicago (ranked 6th) and Milwaukee (14th).

The NRDC says it focused its report on cities because “in many industrialized countries like the United States, there is evidence that allergic respiratory diseases are increasing in prevalence and severity, and some studies suggest that city dwellers are more likely to experience allergy symptoms. living in rural areas.

Likely to get worse

The report warns that as climate change continues to warm the Earth (and 2014 was the hottest year on record), millions more Americans are at risk of developing allergies, asthma and other potentially serious respiratory illnesses.

Allergies and asthma are already plaguing a large number of Americans. About 17.6 million adults and 6.6 million children living in the United States have been diagnosed with seasonal allergic rhinitis (hay fever) in the past 12 months, according to the Centers for Disease Control and Prevention. In addition, some 18.7 million adults and 6.8 million children currently have asthma.

The prevalence of asthma in the American population has been increasing for more than a decade, a particularly disturbing statistic. Asthma is a chronic and potentially fatal disease that causes inflammation and narrowing of the airways, making it difficult to breathe. About nine Americans die from asthma every day. In addition to this human toll, asthma costs the US economy approximately $ 56 billion one year. 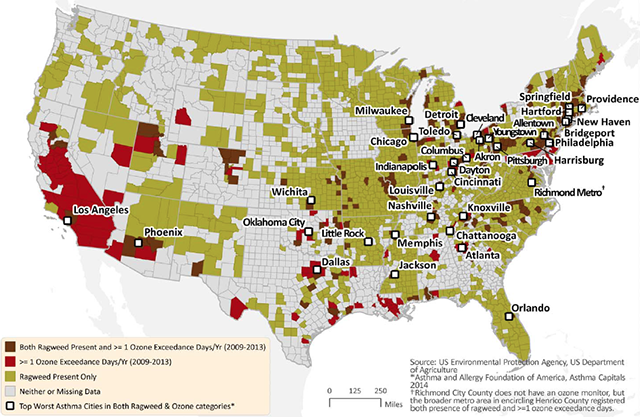 What you can do

The NRDC urges government officials to take action to reduce the effects of climate change by strengthening carbon pollution standards and the health standard for ozone pollution. They also call for better pollen data collection and more ozone monitors.

The organization also offers advice to people who want to protect themselves and their families from pollen and ozone. These tips include the following:

You can read the NRDC report titled “Sneezing and Wheezing: How Climate Change Could Increase Ragweed Alergies, Air Pollution and Asthma” in its entirety. on the organization’s website.