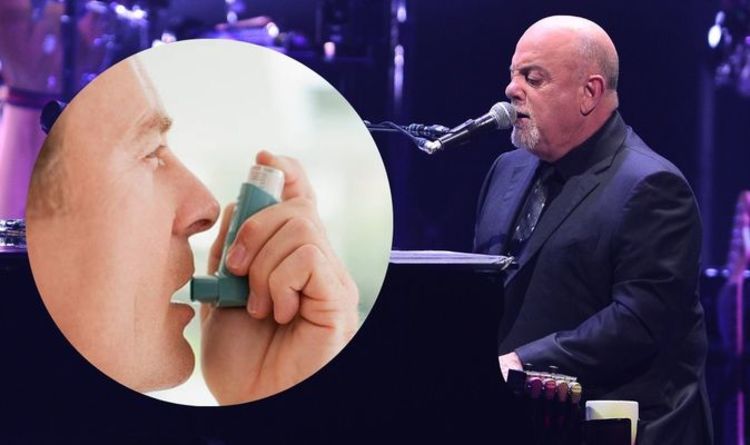 The 72-year-old singer whose real name is William Martin Joel has appeared in general good health for most of his career. Still, an incident that took place live on stage revealed that the star suffered from severe asthma. During a joint tour with fellow megastar Elton John, Joel suffered a severe asthma attack causing him to withdraw from the rest of the performances.

The three-hour streak the pair were in the middle of came to an abrupt end, and Joel’s removal from the show meant 50,000 ticket holders were offered a refund.

Speaking about his friend, Elton said: “It was a little weird not seeing Billy there because we’re so used to doing this thing and not seeing the piano and him in front of me was very weird. .

“I am very sorry for him. I spoke to him yesterday and he is very bad and he is feeling very bad.

“It’s the kind of thing you can’t risk it with because it could ruin your voice forever, so he just has to rest until he’s ready to come back and I’ll go to Dusseldorf, Munich and Berlin and do these shows by myself.

This isn’t the first time the Uptown Girl singer has had to postpone concerts due to his medical condition. In 2017, the singer contracted a “viral infection” which led him to postpone his show at Madison Square Garden.

Viral infections such as the common cold and the flu affect people with asthma more than others and can lead to serious complications. Asthma UK reveals that 75 percent of people with asthma report that their symptoms get worse during cold or flu season.

This is because people with asthma develop swollen and tender airways. Flu infections can trigger asthma attacks and worsen asthma symptoms.

The main symptoms of asthma are:

Professor Suveer Singh is a consultant in respiratory medicine and also known as the respiratory doctor. He warns that other asthma risk factors include allergies, medical history, family history and air pollution – which is even more apparent lately.

Professor Singh said, “Air pollution is bad for everyone, but it can be worse for people with asthma. When chemical or particulate pollution enters your airways, it can irritate the lining and trigger inflammation.

“About two in three people with asthma will find that their symptoms get worse when the air quality is poor. Although using your preventative inhaler may limit the impact, you may find that you need to use your reliever inhaler more often when you are in polluted areas. Air pollution can increase the risk of an asthma attack.

“We can’t completely avoid outdoor air pollution, but there are steps we can take to reduce our exposure. »You can reduce exposure to air pollution by:

Doc, what kind of covid-19 vaccine should I take? – The Sun Nigeria