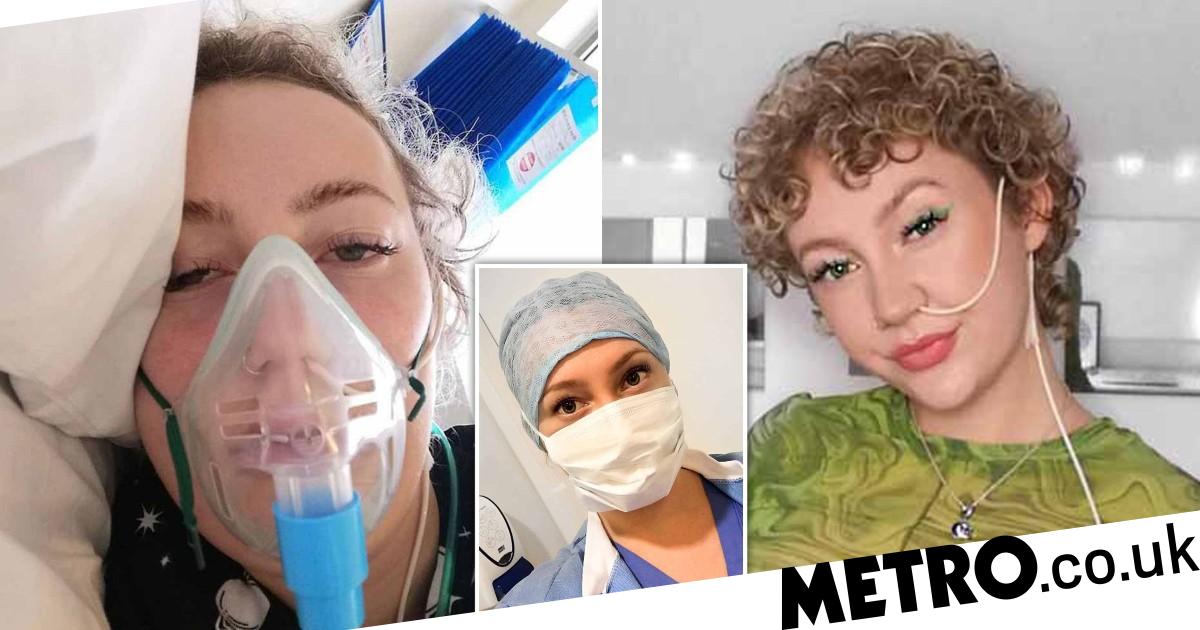 ‘Allergic To Everything’ Trainee Nurse Almost Killed By Sandwich

When Mia Lainchbury, 26, spotted a festive sandwich at a gas station while her boyfriend was refueling, she knew she must have it.

However, soon after devouring it, the former student found herself breathless and scared for her life.

“I remember thinking ‘ooh, this is so good,’ she recalls. “But, within 10 minutes, my airways were closing and I couldn’t breathe. Fortunately, on this occasion, I did not need CPR.

Although she had to go to the hospital after the episode, this is unfortunately not a rare occurrence for Mia. In the past three months alone, she has had to be resuscitated three times due to severe allergic reactions.

Already diagnosed with a wide range of chronic illnesses, she believes her recurrent anaphylaxis – a serious and life-threatening allergic reaction – was triggered in September when she struggled to breathe after taking an antibiotic.

Since then, Mia’s poor health has forced her to drop out of nursing lessons and return home with her mother, director of insurance, Steph Lainchbury, 51, her father, a telephone engineer, Gavin, 55, and her brother Callum, 23, in Hailsham, East Sussex. .

She also required CPR three times due to her extreme allergies – once after reacting to the heat of the shower and twice to unknown triggers.

Recalling her spooky experience with the Christmas sandwich, which saw her admitted to hospital even after using two EpiPens, Mai said, “What started as a delicious treat ended an hour later with three paramedics and breathing equipment.

“I have no idea what the exact trigger is, but I’m not going to eat a sandwich in a rush anymore.” “

This is not recognized by all doctors, so Mia could not be officially diagnosed. Instead, she learned about it through the online chronic disease community, where she often talks with other people with the disease.

Mia, who has been dating her partner Peter, 28, for four years, explained: “Every time I do CPR I risk losing my mental abilities if the oxygen does not reach my brain.

“So although I’m only 26, I’ve already talked to my doctor about signing a non-resuscitation or DNR order, so if I find myself in a coma it takes the stress out of it. make a decision for my family. “

“Now it’s gotten ridiculous,” she admitted. “Anything can trigger anaphylaxis.

“I can’t even burn candles now because a gingerbread scented candle triggered a reaction.

“Everything I use, from washing powder, has to be totally bland. “

When she had an anaphylactic episode in October due to an unknown trigger, Mia stopped breathing and said she could still have her parents’ heartbreaking conversation while they were doing CPR for her.

She said, “I could hear my parents talking about their fears that I would die before their eyes.

“I felt like I was dreaming because I could hear the paramedics telling me I could go anytime.

‘It’s really stuck with me.

“I really remember that attack when my grandfather was from Spain.

“I started to feel bad, but I fought stupidly and kept taking antihistamines because I didn’t want to make too much noise.”

On another occasion, Mia’s boyfriend had to give her CPR because a simple hot shower triggered a reaction.

“It was horrible for him. He was the only one doing CPR on me and I could hear the panic in his voice, ”she recalls.

“All I had done was take a shower, so I think the reaction was triggered by the heat and the temperature changes.

“Then I had another allergic reaction that day in the hospital. I was rushed to intensive care and prepared for an induced coma.

“Fortunately, they put a nasal breathing cannula in my throat and created an airway.

Before she began to experience random allergic reactions, Mia was already struggling with several chronic conditions, including asthma, irritable bowel syndrome, and Ehlers-Danlos syndromes – a group of conditions that cause joints to be very flexible and elastic, fragile skin – as well as postural tachycardia syndrome (POTS), which is an abnormal increase in heart rate when standing or sitting – when she started having symptoms of MCAS.

Recently, she was also diagnosed with a collapsed bowel, which means that part of her bowel works with a “telescoping action,” often blocking the passage of food.

This means that she now depends on her tube feeding in her small intestine for food.

“And I have what I call my Dora the Explorer backpack, which connects me to my feed, which I have with me 20 hours a day.

“I call the remaining four hours my free time. “

While her poor health means Mia had to quit nursing training in her sophomore year in 2020, she is hopeful that one day she can return.

However, Mia also has to deal with the complexity of being happy for her friends as they reach milestones, like getting married, having babies, and advancing their careers, when her life has been cut short by her health.

She can’t even move in with her boyfriend because her condition is too unstable.

She said: “Sometimes I look at everything that is happening to me and how about to die and I feel totally overwhelmed by it all.

“But trying to raise awareness about chronic disease gave me a purpose.”

“I have done my best to raise awareness about chronic diseases, to break down the stigma around them and the support I have received in return has been overwhelming.

“I would literally go so far as to say that by telling me about MCAS, my friends in these online groups saved my life.”

Feeling unable to get the help she needs through the NHS, Mia now hopes to raise £ 5,000 for treatment with an immunology specialist.

She said: ‘With the money raised so far I was able to pay £ 250 for a video appointment with a specialist.

“It is such a relief, because my situation could truly be life or death.”

Contact us by sending an email to [email protected]

MORE: People With Severe Food Allergies Share How Hard It Is To Eat Out

MORE: Boy died when grandpa forgot about his allergy and served nuts with Christmas dinner