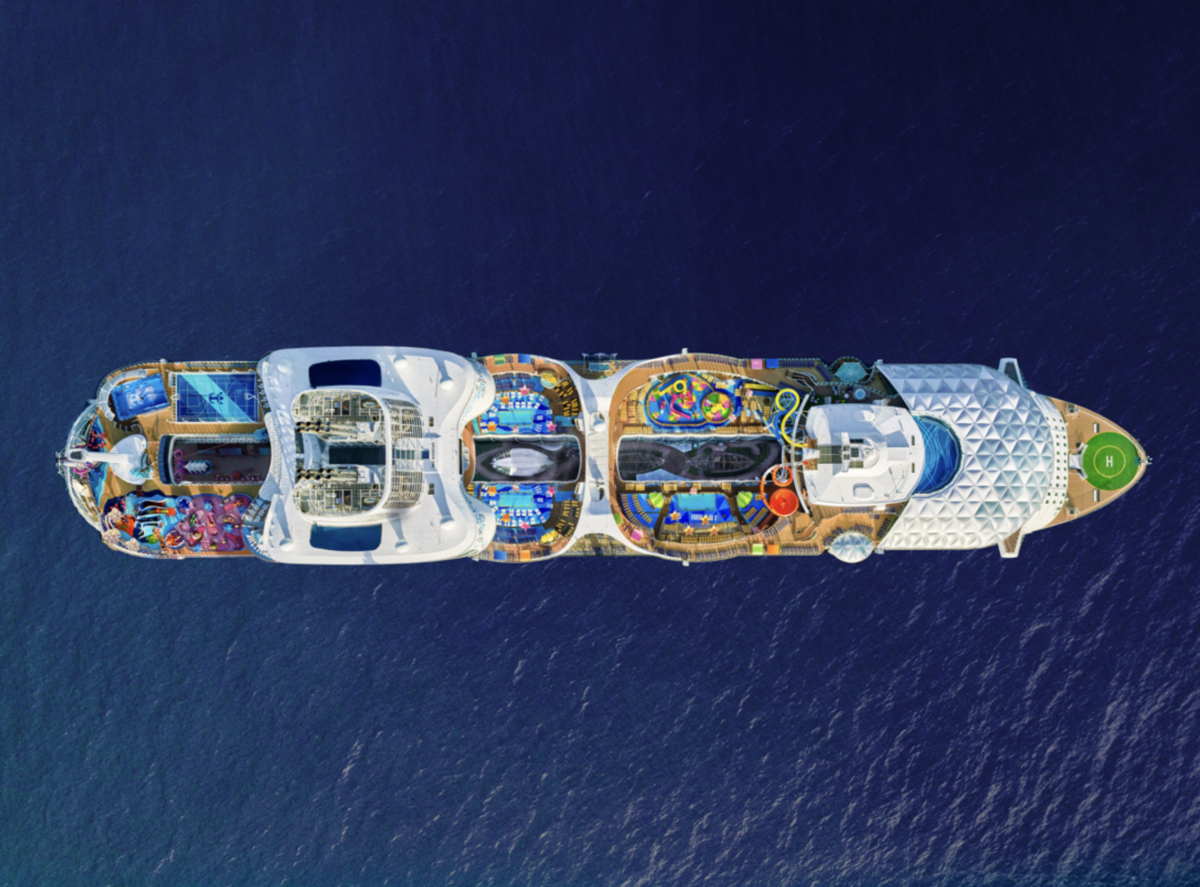 Royal Caribbean has always been a cruise line known for innovation, from creating the Royal Promenade to building the first “Central Park” at sea and, of course, designing the world’s largest cruise ships.

I love everything about cruising with Royal Caribbean, but I can’t help but think of new ideas and features I’d like to see on future cruise ships in the fleet.

From new specialty restaurants to onboard activities to new staterooms, here are 13 changes and upgrades I’d like to see incorporated on Royal Caribbean ships.

The exterior Promenade Deck is one of my favorite places on any Royal Caribbean cruise ship, especially on ships where the Promenade Deck wraps entirely around the circumference of the ship.

The Promenade Deck is such valuable real estate, but it seems Royal Caribbean isn’t taking advantage of this space as much as other cruise lines.

Many cruise lines use this space for comfortable seating, hot tubs, swimming pools, al fresco dining, bars, and other lounging areas. I would love to see this concept on a Royal Caribbean ship rather than just a walking area!

Thai food is one of my favorites, but it’s something hard to find on a Royal Caribbean cruise. Other than the occasional “pad thai” served in the Windjammer, I have never seen any other Thai food offered on board.

My wish list for a new specialty restaurant would be a Thai restaurant, although I’m not sure that’s ever something that will come to fruition as Royal Caribbean ships already have Izumi on board for Asian cuisine.

Another random item on my wishlist for future Royal Caribbean ships is a “street food” cart that rotates around the ship.

One of my favorite parts of traveling is trying the local street food, whether it’s elotes in Mexico, falafel in Egypt or bánh mì in Vietnam, and I think street food has become increasingly popular in recent years.

It would be interesting to see Royal Caribbean take advantage of this trend by introducing some kind of “street food” on its cruise ships. I imagine a food cart with easy-to-prepare dishes that travels around the ship every day and offers cuisine not found elsewhere on board.

If the street food cart is a bit too far-fetched, I think there is great potential for a food hall/market option on future Royal Caribbean ships.

This concept was first deployed on Virgin Voyages cruise ships and recently made its debut on Norwegian Prima. Most of the food court items on these ships are free and serve as a hip food spot reminiscent of food truck parks and city markets around the world.

I would love to see a food hall on a Royal Caribbean ship!

Many cruise lines sail solo, and it would be nice to see some sort of exclusive solo cruising area on board.

Norwegian Cruise Line, for example, has an area reserved for solo cruisers with studio cabins and a private studio lounge. Solo passengers can enjoy free coffee, espresso and snacks in the lounge while getting to know other solo cruisers.

This would be a great concept to see on future Royal Caribbean cruise ships, and I would definitely take advantage of it when planning a solo cruise.

Related: What I learned from my first solo cruise

Mariner of the Seas and Independence of the Seas both have a set of hammocks on the ship’s sports fields and I love that feature!

Swinging in a hammock is extremely relaxing, especially on a cruise ship, and it’s the perfect place to relax and enjoy ocean views. More hammocks, please!

I visited Epcot from Walt Disney World for the first time last year and enjoyed the global feel of the park. Epcot’s Global Storefront consists of 11 distinct areas representing countries around the world, including Canada, France, Morocco, Germany, Norway and Mexico.

Each of these storefronts features restaurants, shops, architecture and attractions themed around the country it represents, and it’s a unique way to “see the world” from one place.

A few months ago while on a cruise ship I was reminiscing about my time at Epcot and thought that the world theme might be a really cool idea for a Royal Caribbean cruise ship .

Because Royal Caribbean already has so many restaurants of diverse cuisines, the ship’s theme could incorporate these restaurants into their own themed “enclaves” by different countries around the world.

It is very difficult to find an electrical outlet in public areas on Royal Caribbean ships, and when you do, it is often in an inconvenient location and a European-style outlet.

Many people are working remotely these days, and Royal Caribbean is adding Starlink Internet to all of its ships. The combination of these two factors can mean that the demand for remote work on a cruise ship will skyrocket.

It would be nice to see more outlets in public areas on board, although I’m not entirely sure that will happen. After all, Royal Caribbean wants its guests to enjoy the amenities of the cruise ship (and spend money on drinks, shopping, etc.) instead of being on their laptops all day!

I love eating at the Windjammer on a Royal Caribbean cruise, but wish they had labels on the items. Some cruise lines have more detailed labels above each food showing ingredients and allergy information, which is very helpful for passengers with dietary restrictions or allergies.

Although I have no food allergies, I am a pescatarian and often find myself asking Windjammer crew members if they know what ingredients are in a particular food. I imagine it’s much worse for people with gluten sensitivities, dairy allergies, etc., so it would be nice to see more labels in the Windjammer and other onboard dining locations.

My favorite bar on any Royal Caribbean cruise ship is The Bamboo Room, a Polynesian-inspired tiki bar found only on Navigator and Mariner of the Seas.

The tropical vibes, bossa nova music, and island-themed drinks at The Bamboo Room make it a place I visit again and again, but sadly, it’s only found on two ships in the fleet.

Related: Discover The Bamboo Room’s signature cocktails on Mariner of the Seas

The ambience of The Bamboo Room perfectly matches the atmosphere I seek on a cruise vacation, and I would love to see more locations on new ships or Royal Caribbean amplifications!

While spending the day at Perfect Day at CocoCay’s Thrill Waterpark last year, I learned the hard way that waterslides made me extremely claustrophobic.

Sliding around in a pitch-black slide with water gushing everywhere? I loved him when I was younger, but now not so much.

That being said, I always love adrenaline-filled activities and would be interested in seeing some sort of roller coaster on a Royal Caribbean cruise ship.

Carnival just launched the BOLT Sea Coaster on the new Carnival Mardi Gras, and this ride looks like a ton of fun. I hope to see a similar feature integrated on future Royal Caribbean ships!

Earlier this year, while browsing Harmony of the Seas, I noticed a few short language courses listed in the Cruise Compass. I had never seen this before on a Royal Caribbean ship, so I made sure to attend the 45 minute Spanish class at the Schooner Bar.

I had a lot of fun during the course and I would like to see this type of activity offered more often! On my cruise to Greece, for example, it would have been both fun and helpful to attend a short language course so that I could learn some basic phrases to use in port.

I recently returned from an Alaskan cruise on Radiance of the Seas, and one of my favorite features on the ship was the cinema.

Each Radiance Class ship has an onboard movie theater that shows free movies multiple times a day, every day of the cruise. The cinema provided a much better viewing atmosphere than watching a movie on the pool deck, and it was fun to go see a movie on a sea day to pass the time.

While I’m not sure Royal Caribbean will incorporate more movie theaters into their new cruise ships, I certainly enjoyed my movie experience!

What features would you like to see on the new Royal Caribbean cruise ships? Do you agree with my ideas? Let me know in the comments!

Biden declares war on ‘junk fees,’ but that’s not what Americans need

I am considering allergen immunotherapy for my hay fever. What should I know?